Samsung Electronics has not officially announced the event schedule, but it is highly likely to be held on August 11. A well-known IT tipster Evan Blass unveiled the leaked images of the Galaxy Unpacked event on his Twitter on the 18th. 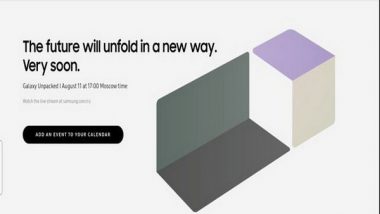 The image announced the time for the Unpacked event at 5 p.m. on August 11th in Moscow time. In Korean time, the event will be held at 11 p.m. on August 11th. In the image, the sentence 'The future will unfold in a new way' was used. Therefore, it is expected that new foldable phones 'Galaxy Z Fold 3' and 'Galaxy Z Flip 3' will be unveiled at the unpacked event. Samsung Galaxy Z Flip 3 & Galaxy Z Fold 3 New Renders Surface Online: Report.

According to the industry, Samsung Electronics recently offered the price of Galaxy Z Fold 3 at about 1.99 million won to mobile carriers. This price is about 400,000 won lower than the previous model, Galaxy Z Fold 2's price of 2.398 million won.

Also, the price of Galaxy Z Flip 3 is reportedly about 1.28 million won, and it is about 400,000 won lower than the previous model, which was 1.65 million won. It is analyzed that Samsung Electronics decided prices considering the competition between Apple, which announced to release iPhone 13 in the second half of the year, and Chinese companies that have entered foldable phone markets.