At least one was killed and several members of the Muttahida Qaumi Movement-Pakistan (MQM-P), including women were left injured after Karachi police baton-charged and tear-gassed them during a protest at the city's Shahrah-e-Faisal, local media reported. 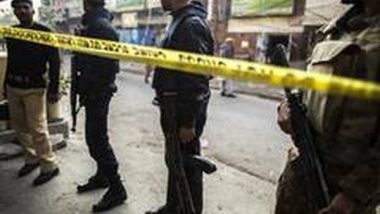 Karachi, January 27: At least one was killed and several members of the Muttahida Qaumi Movement-Pakistan (MQM-P), including women were left injured after Karachi police baton-charged and tear-gassed them during a protest at the city's Shahrah-e-Faisal, local media reported.

According to Geo News, MQM-P's parliamentarian leader Khalid Maqbool Siddiqui confirmed that one of the party workers -- identified as Aslam -- succumbed to his injuries.

Also Read | From 9mm Pistol to AK-47, Everything Is on Sale and Home Delivered Like Pizza in Pakistan.

"We will register a first information report (FIR) under a section of terrorism against Chief Minister Sindh Murad Ali Shah for the murder of our worker," Siddiqui said.

He confirmed that the funeral prayers of Aslam would be held in Karachi today, adding that several other members of the MQM -- including women -- are currently hospitalised as they sustained injuries after the police baton-charge and tear-gassed them, Geo News reported.

The senior MQM-P leader said that while the party had earlier announced a "Black Day" in Karachi today, it will now observe a "day of mourning" (youm e soug) due to the death of the party worker.

Meanwhile, announced that the party will observe a "Black Day" on January 27. MQM-P workers and leaders had gathered in large numbers during the afternoon hours of Wednesday to stage a protest against the controversial local government bill.

Later on, the protesters attempted to reach the Chief Minister's House for a sit-in. As a result, the flow of traffic was severely affected on the road considered to be the city's main artery.

The police, however, baton-charged the crowd and used teargas shells in an attempt to dissuade it from entering the red zone.