Get latest articles and stories on World at LatestLY. Prime Minister Narendra Modi has a clear message for the world's richest nations comprising G7 to address the Ukraine conflict in a peaceful manner through dialogue and peace and pitched India as a solution provider for the global food, health and energy crisis. 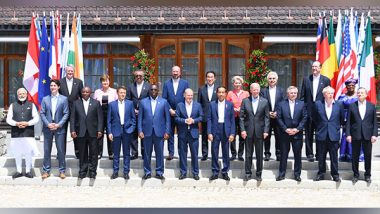 Group of Seven in Germany

Schloss Elmau [Germany], July 2 (ANI): Prime Minister Narendra Modi has a clear message for the world's richest nations comprising G7 to address the Ukraine conflict in a peaceful manner through dialogue and peace and pitched India as a solution provider for the global food, health and energy crisis.

While he met global leaders in what was a display of excellent chemistry he shares with the G7 nations, PM Modi's meetings with leaders of Argentina, South Africa and Indonesia in particular was an attempt to strengthen South-South Cooperation amid the geo-political tensions.

PM Modi's two-day visits to Europe in quick succession had an underlying message that a multipolar order is in the making.

PM Modi has just wrapped up his two-nation tour on June 28, after an extremely successful visit to Germany as well as the United Arab Emirates.

It was an action-packed schedule in Germany where the Prime Minister attended the largest community programme post-COVID-19 pandemic.

"PM @narendramodi and President @jokowi had a productive meeting. Their talks will add strength to the Comprehensive Strategic Partnership between India and Indonesia. Both leaders also discussed ways to boost connectivity and business linkages," PMO had tweeted.

After the G7 summit Modi had tweeted that he had a "productive visit" to the European nation.

"I thank the people of Germany, @Bundeskanzler Scholz and the German Government for their hospitality during the entire visit. I am confident India-Germany friendship will scale newer heights in the times to come," he had tweeted.

"Leaving Germany after a productive visit in which I attended the @G7 Summit, interacted with several world leaders and participated in a memorable community programme in Munich. We were able to discuss many issues aimed at furthering global well-being and prosperity," PM Modi said further.

"We were able to discuss many topics aimed at promoting global well-being and prosperity," he added.

PM Modi, who arrived in Germany, had addressed a gathering of thousands of people from the Indian diaspora at an event in Munich.

In his address, PM Modi underscored the country's achievements in a short span of time and said India is impatient to fulfill its dreams.

"I am touched by the special gesture of my brother, His Highness Sheikh Mohamed bin Zayed Al Nahyan, of coming to welcome me at Abu Dhabi airport. My gratitude to him," the Prime Minister said in a tweet.(ANI)