Get latest articles and stories on World at LatestLY. Scores of people protested in a market of mobile phones in Pakistan's Karachi city over a blasphemous text that appeared on several cell phones due to a Wi-Fi device installed at the market. 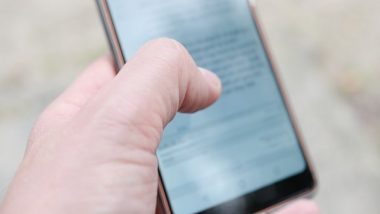 Karachi [Pakistan], July 2 (ANI): Scores of people protested in a market of mobile phones in Pakistan's Karachi city over a blasphemous text that appeared on several cell phones due to a Wi-Fi device installed at the market.

The protest erupts in the Saddar area of Karachi on Friday and lasted for atleast five hours, The News International reported.

According to police, some people had mischievously chosen the blasphemous text as the name of the Wi-Fi router. The protesters torched and damaged stalls and banners of the company.

News International reported that they detained 22 people including the office staff of a private company.

Blasphemy arrests and mob violence continue to escalate in Pakistan as blasphemy laws are leading to the erasure of atheist identities.

Pakistan is among one of 32 Muslim-majority countries that impose harsh penalties for blasphemy, apostasy, or atheism, and one of 12 that punishes these "crimes" with death. The atheists, agnostics, and other dissenters of Islam in the country are fast losing their safe spaces online, which they had built to dodge the institutionalized threats engulfing them, media reports stated.

After the Pakistan Electronic Crimes Act (PECA) in 2016 co-opted the harsh clauses of the Pakistan Penal Code, blaspheming online became a capital crime.

In 2017, immediately after passing PECA, Pakistan issued its first death sentence for digital blasphemy. The same year, the state launched a crackdown on online dissent and atheism, urging the masses to 'report blasphemers,' going so far as to abduct and torture activists and bloggers for dissent against the military establishment and Islamic hegemony.

Since Islamic hegemony helps the state, especially the all-powerful military and radical Islamist groups, maintain its autocratic control, it has been in the rulers' interest to silence all forms of dissent, DailyDot reported, citing sources.

However, some Pakistani atheists believe that their free-thinking kin will hopefully have their day.

Prevention of Electronic Crimes Act (PECA) law goes on to intimidate Pakistan's marginalized communities by giving power to those who are reigning in the top powers. The Pakistan government has also urged Facebook and Twitter to help in identifying the blasphemers on their platforms and has also issued warnings to cell phone users, regarding the perils of sending blasphemous texts by the PTA. (ANI)