Taiwanese President Tsai Ing-wen said on Saturday that she has hopes for less tensions with China and in the region if Beijing will listen to Taipei's concerns, alter its approach and restart dialogue with the self-ruled island democracy. 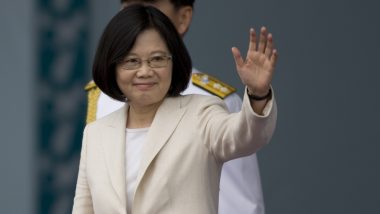 Taipei, Oct 10: Taiwanese President Tsai Ing-wen said on Saturday that she has hopes for less tensions with China and in the region if Beijing will listen to Taipei's concerns, alter its approach and restart dialogue with the self-ruled island democracy.

Speaking at Taiwan's National Day celebrations on Saturday, Tsai took note of recent remarks by Chinese leader Xi Jinping in a video message to the UN General Assembly that China would never seek hegemony, expansion or to establish a sphere of influence.

“As countries in the region and around the world are now concerned about China's expanding hegemony, we hope this is the beginning of genuine change," Tsai said in her annual address at the Presidential Office in downtown Taipei.

If Beijing can “heed Taiwan's voice, change the way it handles cross-strait relations, and jointly facilitate cross-strait reconciliation and peaceful dialogue, I believe that regional tension can surely be resolved," Tsai said.

China's ruling Communist Party claims the self-governing island as Chinese territory to be annexed by force if necessary. Beijing cut contacts with Tsai's government following her election to a first term in 2016 and has steadily increased diplomatic, military and economic pressure on the island of 23 million to compel her to endorse its contention that Taiwan and the mainland constitute a single Chinese nation.

Tsai, of the pro-independence Democratic Progressive Party, was reelected by a wide margin this spring and especially since September, China has been sending warplanes and ships into areas under Taiwanese control, prompting the island's air force to scramble its jets at a faster tempo than before.

"For some time now, harassment by air and sea from the other side has raised tensions in the Taiwan Strait," Tsai said, adding that Taiwan would neither show weakness nor “act rashly."

"We are committed to upholding cross-strait stability, but this is not something Taiwan can shoulder alone; it is the joint responsibility of both sides," she said. “As long as the Beijing authorities are willing to resolve antagonisms and improve cross-strait relations, while parity and dignity are maintained, we are willing to work together to facilitate meaningful dialogue."

She said such an approach was built on a cross-party consensus, a nod to the main opposition Nationalist Party, which although formally advocating unification with China has been downplaying that stance in a bid to stem electoral losses.

China's campaign of isolation has seen Taiwan excluded from international gatherings and reduced its number of diplomatic allies to just 15, even while it enjoys strong informal support from the US, Japan and other major democracies.

Tsai also praised Taiwan's success in containing the coronavirus outbreak and outlined steps taken to boost its high-tech economy and the military.

Her speech was bookended by displays of troops and civilian defense forces, as well as bands and dance performances in front of invited guests and members of the public in front of the presidential building that dates from Taiwan's time as a Japanese colony from 1895 to 1945.

Following World War II, Taiwan was handed over to the Republic of China run by Chiang Kai-shek's Nationalists, who moved to the island in 1949 ahead of the Communist takeover of the mainland.

October 10 National Day dates from the start of a 1911 rebellion against the Qing, China's last empire, that led to the establishment of the Republic of China, which remains Taiwan's formal name.