The United States Navy is scrambling to retrieve F-35, its most advanced fighter jet, which crashed in the depths of the South China Sea. 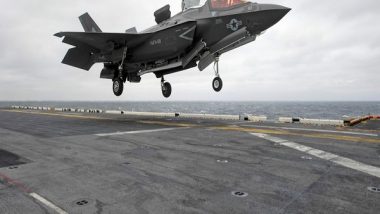 Washington, January 27: The United States Navy is scrambling to retrieve F-35, its most advanced fighter jet, which crashed in the depths of the South China Sea.

This race to get back the USD 100 million warplane is an extremely complex operation that experts say will be closely monitored by Beijing, American news network CNN reported.

Also Read | From 9mm Pistol to AK-47, Everything Is on Sale and Home Delivered Like Pizza in Pakistan.

The F-35C, the newest jet in the US Navy fleet, crash-landed on the aircraft carrier USS Carl Vinson during routine operations on Monday.

At least seven persons were injured in a US F-35 jet crash on the deck of the USS Carl Vinson aircraft carrier in the South China Sea, the Navy said.

The US Pacific Fleet said that the pilot of a US F-35 jet was conducting routine flight operations when the crash happened. But he was safely ejected and was recovered by a military helicopter and he is in stable condition.

The cause of what the statement called an "inflight mishap" is under probe, CNN reported.

The crash is the first for an F-35C, a single-engine stealth fighter, designed for operations off aircraft carriers. Some versions of the F-35 are also flown by US allies and partners, including Japan, South Korea, the United Kingdom and Australia.

Monday's crash in the South China Sea was the second of an F-35 this year.

Earlier this month, the pilot of a South Korean F-35 made an emergency "belly landing" at an airbase on Tuesday after its landing gear malfunctioned due to electronic issues, according to the South Korean Air Force.

In previous years, F-35s have been involved in at least eight other incidents, CNN reported citing records kept by the crowd-sourced website.