Get latest articles and stories on World at LatestLY. The suspect in a mass shooting at a July Fourth parade in the Chicago suburb of Highland Park, which killed six people and at least 24 injured, has been detained near Lake Forest in Illinois, local media reported citing authorities. 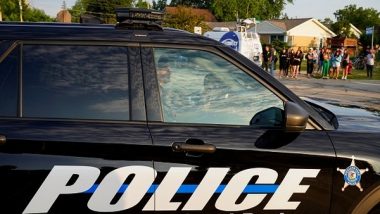 Washington [US], July 5 (ANI): The suspect in a mass shooting at a July Fourth parade in the Chicago suburb of Highland Park, which killed six people and at least 24 injured, has been detained near Lake Forest in Illinois, local media reported citing authorities.

During a press conference Monday night (local time), authorities informed that the suspect Robert E Crimo III was spotted by a North Chicago officer who attempted a traffic stop. He was taken into custody without incident and will be transferred to the police department in Highland Park, according to CNN.

Earlier, the US law enforcement agencies said that they have identified a "person of interest" in the shooting incident.

"He is considered armed and dangerous," Deputy Chief Christopher Covelli said, as per Washington Times.

Crimo goes by the name Bobby and hails from the area of Chicago's northern suburbs. The suspect aged 22 was believed to be driving a silver car.

The Federal Bureau of Investigation (FBI) in Chicago is assisting the local police in Illinois with the search for Crimo.

"He (Robert E. Crimo, III) being sought for his alleged involvement in the shooting of multiple individuals at an Independence Day parade in Highland Park, Illinois, at approximately 10:00 a.m. on July 4, 2022. At least six people were killed and 24 were injured," the FBI said.

"Crimo, III, is believed to be driving a 2010 Silver Honda Fit with Illinois License Plates reading DM80653," it added.

US President Joe Biden expressed shock over "senseless gun violence" reported in the state of Illinois during the July 4 event on Monday.

As many as six people were killed and 24 were hospitalized in the shooting at the US Independence parade route in north suburban Highland Park in Illinois. Dozens of others were injured and sent to hospitals, with 12 of them in serious condition.

"Jill and I are shocked by the senseless gun violence that has yet again brought grief to an American community on this Independence Day. As always, we are grateful for the first responders and law enforcement on the scene," Biden said in a statement.

Biden said he will monitor the situation closely amid the search for the shooter.

"I also surged Federal law enforcement to assist in the urgent search for the shooter, who remains at large at this time. Members of the community should follow guidance from leadership on the ground, and I will monitor closely as we learn more about those whose lives have been lost and pray for those who are in the hospital with grievous injuries," he added.

A gunman, who had apparently fired from a concealed spot on a rooftop, sent hundreds of marchers, parents with strollers and children on bicycles fleeing in terror.

The Independence Day parade shooting is the latest in the line of incidents reported in schools, churches, grocery stores and now community parades in recent months. (ANI)