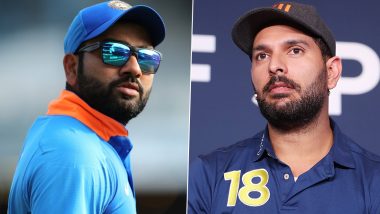 New Delhi [India], April 7: Opening batsman Rohit Sharma on Tuesday revealed that when he came to the Indian side, his cricket crush used to be Yuvraj Singh. He made the revelation during an Instagram Live session with Yuvraj. During their interaction, Rohit and Yuvraj spilt the beans on a funny incident that happened when the former made his foray into the Indian side. Yuvraj Singh Recalls First Impression of Rohit Sharma, Says ‘He Reminded Me of Inzamam-ul-Haq’.

"When I came into the team, my cricket crush was Yuvraj Singh. I just wanted to talk to Yuvraj, I wanted to see how he prepares, the role that Yuvraj had, I had to essay the same role eventually in the middle order," Rohit said during the session. "When it came to fielding, I wanted to learn from Yuvraj. There was an incident in which I had entered the team bus early, I was half an hour early and I had taken the seat which was originally reserved for Yuvraj. He then entered the bus and I thought 'that is how you make an entry'," he added. Yuvraj Singh Pledges to Donate Rs 50 Lakh to PM CARES Fund in Fight Against COVID-19 Pandemic.

Rohit then went on to narrate what Yuvraj did when he found out his seat was already occupied. "He asked me 'do you know whose seat this is'? He then said, 'get up, it is my seat, you go sit on another seat'. RP Singh had told me that the seat was Yuvraj's but I still chose to sit there. Having said this, we have a good relationship now," Rohit said.

Yuvraj also had high words for Sharma and went on to say that he had predicted that among the younger lot, Rohit Sharma would go on to become a really matured player. Rohit had a remarkable 2019 as he became the first player to score five centuries in a single edition of the World Cup. He also went on to open the batting in Test cricket and saw immediate success.