The students of KL Deemed University here have developed a unique electric bike with wireless charging technology. The e-bike developed by the team at KLU allows people to travel at a maximum speed of 55 kmph. 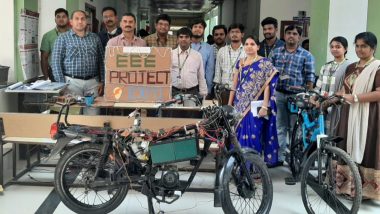 Hyderabad: The students of KL Deemed University here have developed a unique electric bike with wireless charging technology. The innovative prototype was developed by a team of six like-minded 3rd and 4th year students from the Electrical and Electronics Engineering Department of KL College of Engineering along with a few university alumni members. The e-bike developed by the team at KLU allows people to travel at a maximum speed of 55 kmph with a charging capacity that can cover between 85 and 100 km in standard conditions in a single recharge that takes five hours.

The charging technology is coupled with the programmable cell balancing feature that releases maximum battery potential for a long-lasting charge. The e-bike has futuristic features, including cell balancing and wireless charging, which are only available in a few places around the world. The team developed the initial concept and prototype utilising their free access to the labs and testing facilities provided by the university, which also has campuses in Andhra Pradesh and Telangana.

The team retrofitted an existing bike and modified it into a prototype for e-bikes with wireless charging. The team carried out several variations in the design of the bike which include incorporating the BLDC motor (Brushless DC electric motor) to gear modules through the controller. The university has offered a grant of Rs 1.40 lakh to the team to incubate this project idea as a startup.

"While the whole faculty appreciates the passion and the hard work of these students, we reiterate the vision of the university to focus on research and innovation for the long-term benefits of the students as well as the country," said Koneru Satyanarayana, President, KL Deemed University.

"We got interested in building prototypes and participating in competitions from our first year itself. The lab-based projects at the KL University provided a strong foundation on working with the components, measurements, machines, and power electronics," said M. Satyardha Pravashik, a B.Tech final year student, who was part of the team that developed the e-bike.

Other team members who were part of the project were Charan Sai Tiruvuri, Sandeep, Kireeti Polasi, S. Lokesh Babu, V. Sai Praveen, all students from the B. Tech EEE 2017 batch, and K. Yashwanth Sai, who is an alumni of the EEE department.

(The above story first appeared on LatestLY on Jun 23, 2021 09:10 AM IST. For more news and updates on politics, world, sports, entertainment and lifestyle, log on to our website latestly.com).