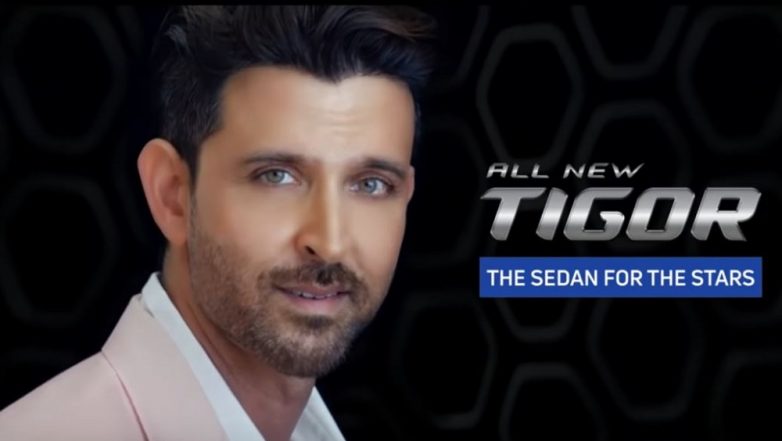 Tata Motors, a home grown auto manufacturer is gearing up for its 3rd festive launch, which is the 'all-new Tata Tigor'. Slated to launch on October 10, the company has appointed Hrithik Roshan as the brand ambassador for its upcoming new 2018 Tata Tigor. The car maker have already sent out invites to the media and it is believed that Hrithik Roshan will be launching the sedan in Delhi. The sedan is all set to get its first update ever since it was launched in the domestic market. Tata Harrier SUV Officially Teased Again; Undergoes Water Wading Test - Watch Video.

The new 2018 Tata Tigor will feature cosmetic updates wherein the sedan will carry new headlights, new tail lights, power folding wing mirrors, new alloy wheels and shark fin antenna and more. On the inside, the sedan is also expected to carry considerable updates. The mechanical front of the sedan is expected to remain untouched. The petrol engine will be the same 1.2 litre Revotron unit tuned to make 84 bhp of max power and 115Nm of peak torque. The diesel engine will be a 1.05 litre Revotorq unit capable of churning 70 bhp & 140 Nm of power figures. Both the engines will be mated to a 5-speed manual gearbox as standard along with an optional AMT on petrol. Tata Harrier SUV aka H5X Concept Official Teaser Released Ahead of India Launch - Watch Video.

On the pricing front, the new Tata Tigor 2018 sedan is expected to be premium by Rs 30,000 than the predecessor. The sedan is expected to be priced under Rs 8 lakh (ex-showroom). Once launched, the sedan will be pitted against Maruti Dzire, newly launched Ford Aspire, Honda Amaze, Hyundai Xcent and others. Tata Tiago NRG Crossover Launched in India at Rs 5.49 Lakh; Specifications, Features, Variants & Colours.

Speaking on this association, Mr. Mayank Pareek – President, Passenger Vehicle Business Unit, Tata Motors said – We are very excited to have Bollywood’s most loved style icon - Hrithik Roshan on board as the brand ambassador for the new Tigor. Built with immense attention to detail, the new Tigor promises to provide its inmates with a premium drive experience. Resonating with brand Hrithik Roshan, the new Tigor stands for versatility, consistent strong performance and unparalleled style. It’s built for those who are stars in their own right and have put all their heart into achieving the success they live today. We hope our customers like this new avatar of the Tigor and we look forward to their continued support.”

Endorsing the stylish Tata Tigor, Hrithik Roshan said – “I am honored to be associated with the Tata Motors family and excited to be part of this journey. The Tata Tigor is a modern stylish sedan, with fantastic features. I really like its coupe inspired design, which gives it a very luxurious feel. I wish Tata Tigor good luck ahead of its launch.”