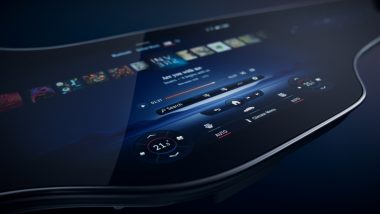 New Delhi, Jan 8: German carmaker Mercedes-Benz has unveiled a massive 56-inch, pillar-to-pillar infotainment display called "MBUX Hyperscreen" that will debut in the EQS electric sedan in late 2021. The large, curved screen panel extends almost the entire width of the interior, from the left to the right A-pillar. In Hyperscreen,' several displays appear to blend seamlessly, resulting in a curved screen band, while analogue air vents are integrated into this large digital surface to connect the digital and physical world. 2020 Mercedes-Benz GLS Flagship SUV Launched in India at Rs 99.90 Lakh.

In addition to its sheer size, the high-quality, detailed design aesthetic represents the emotionally appealing dimension of the "MBUX Hyperscreen," the company said in a statement on Thursday.

Artificial intelligence (AI) and learn-capable software enable the control and display concept to adapt to its user and make personalised suggestions for a variety of functions from infotainment, to comfort and even vehicle functions.

"We merge technology with design in a fascinating way that offers the customer unprecedented ease of use. We love the simplicity we created with a new level of MBUX," said Gorden Wagener, Chief Design Officer, Daimler Group. "The MBUX Hyperscreen' not only benefits the driver as it is also an attentive assistant for the front passenger, who has their own display and operating area".

"However, the entertainment functions of the passenger's display are only available during the journey within the framework of the country-specific legal regulations," the company said.

"The MBUX Hyperscreen is both the brain and nervous system of the car," said Sajjad Khan, Member of the Board of Management of Mercedes-Benz AG and CTO.

With the new zero-layer feature, the user no longer has to scroll through sub-menus or give voice commands, as the most important applications are always available in a situational and contextual way at the top of the driver's field of vision. The car maker said that this alleviates the driver from needing to make numerous operating steps. The  MBUX Hyperscreen' is surrounded by a continuous plastic front frame. The passenger display allows for individualised content with up to seven profiles. If the passenger seat is not occupied the screen becomes a digital decorative part. The OLED technology is used for the central and front passenger displays, providing an especially brilliant image.

(The above story first appeared on LatestLY on Jan 08, 2021 11:54 AM IST. For more news and updates on politics, world, sports, entertainment and lifestyle, log on to our website latestly.com).