South Korea said on Thursday it will ramp up efforts to promote a homegrown charging technology for electric vehicles (EVs) as an international standard, as the country plans to penetrate deeper into the growing sector. 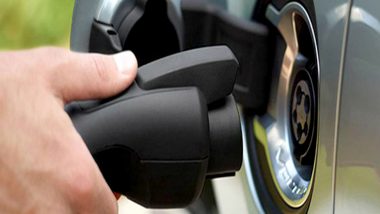 Seoul: South Korea said on Thursday it will ramp up efforts to promote a homegrown charging technology for electric vehicles (EVs) as an international standard, as the country plans to penetrate deeper into the growing sector. The Korean Agency for Technology and Standards held a virtual meeting with experts from home and abroad to further foster the wireless charging technology for EVs with a capacity of 50 kilowatts, according to the Ministry of Trade, Industry, and Energy. Hyundai To Stop Production at Its Korea Plant From Next Week Due to Chip Shortage: Report.

South Korea proposed the technology as a global standard to the International Electro technical Commission last year, reports Yonhap news agency. The technology will allow EVs to be charged up to 80 per cent of their capacity within an hour. The agency said the technology proposed by South Korea holds more potential compared with that suggested by Japan, whose charging capacity stands at 11 kW.

The country, meanwhile, is also carrying out studies to find a breakthrough to have cars charged while driving. The technology is expected to be first applied on buses that run on fixed routes before being available in other automobiles. The agency believes the development can lead to stronger demand for EVs once commercialized. The Moon Jae-in administration has been pushing to foster the industry for EVs in line with its green energy policy. South Korea plans to have eco-friendly cars, including hydrogen fuel cell cars, take up 30 per cent of the total automobiles registered in the country by 2030, rising sharply from the current estimate of 3 per cent.

(The above story first appeared on LatestLY on Apr 15, 2021 11:57 AM IST. For more news and updates on politics, world, sports, entertainment and lifestyle, log on to our website latestly.com).