After a weeklong hold, Tesla has restarted Model S deliveries, but the automaker never explained the reason behind the hold to customers buying the new electric vehicle. 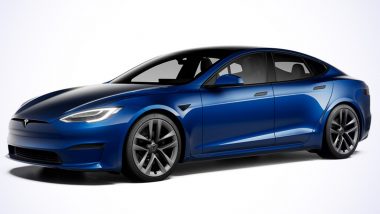 San Francisco: After a weeklong hold, Tesla has restarted Model S deliveries, but the automaker never explained the reason behind the hold to customers buying the new electric vehicle. Last week, many Tesla Model S buyers reported that their vehicles arrived from the Fremont factory to their local delivery centre, but their local sales advisers were telling them that they couldn't deliver the new electric cars. Elon Musk Says Want to Launch Tesla in India, But Import Duties in Country are 'Highest in The World By Far'.

Many of them said that there was a delivery hold on the new version of the Model S, and many different reasons were given to buyers about why they couldn't take delivery, reports Electrek.

Now, several of the same buyers who reported deliveries on hold are able to pick up their cars. However, Tesla has not explained the reason behind the hold. A source familiar with the matter confirmed to Electrek that there was no official "containment hold" on the Model S, which means that it wasn't waiting for a missing part or a software update.

Recently, Tesla CEO Elon Musk said that the company will not offer a regular steering wheel option on the new Model S and Model X vehicles. Musk insists that the yoke steering wheel is worth it for offering better visibility of the instrument cluster and its driving visualisations.

(The above story first appeared on LatestLY on Jul 26, 2021 12:36 PM IST. For more news and updates on politics, world, sports, entertainment and lifestyle, log on to our website latestly.com).