Edtech leader BYJU's is in for a big change with its Founder and CEO Byju Raveendran set to focus his energies on global operations, especially in the US, as the Indian online edtech market shrinks considerably with schools, colleges and tuition centres reopening. 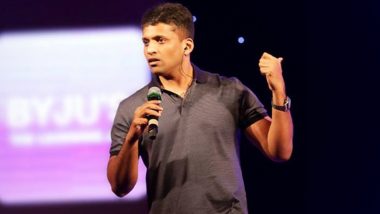 New Delhi, May 30: Edtech leader BYJU's is in for a big change with its Founder and CEO Byju Raveendran set to focus his energies on global operations, especially in the US, as the Indian online edtech market shrinks considerably with schools, colleges and tuition centres reopening.

Sources close to the development told IANS that Raveendran is all set to hand over India operations to Chief Operating Officer Mrinal Mohit. Tata Tea Entity to Provide E-learning to Children of Gardens' Workers

BYJU's, which was last valued at nearly $22 billion making it India's most valued start-up, declined to comment on the development but according to reliable sources, an official confirmation about Raveendran taking a bigger global role would come soon as new designations for Raveendran and Mohit are currently being discussed.

Raveendran is already out of India, meeting investors in the US and the UAE.

BYJU'S in March announced a new partnership with QIA, the sovereign wealth fund of Qatar, to launch a new edtech business and state-of-the-art research centre in Doha.

The new entity in Doha will drive research and innovation to create cutting-edge learning solutions customised for students in the MENA region.

"We are excited to partner with QIA in this next phase of expansion, development and building new innovations in learning in the MENA region," Raveendran had said in a statement.

BYJU'S has also been announced as an official sponsor of the 'FIFA World Cup Qatar 2022'.

In March, the company raised $800 million in a pre-IPO round and in a rare gesture, Raveendran financed $400 million investment in the company through a debt he raised from multiple international banks, as the edtech giant planned for an IPO (which has now been delayed owing to global macro-economic factors and economic slowdown).

The company is also reportedly in talks to raise another $1 billion as it expands globally.

The latest development comes as edtech companies like BYJU's-run WhiteHat Jr, Unacademy, Vedantu, and Lido Learning, are at the forefront of laying off employees, in the name of "restructuring" as funding winter grips the Indian startup ecosystem.

The situation is set to get worse with recession looming and funding drying up.

Overall, edtech platforms in India have laid off more than 3,000 employees and over 7,000 workers have lost jobs in the overall startup industry to date.

(The above story first appeared on LatestLY on May 30, 2022 05:04 PM IST. For more news and updates on politics, world, sports, entertainment and lifestyle, log on to our website latestly.com).