As Bitcoin hovers below $20,000 per digital coin, industry experts fear that the leading cryptocurrency may tumble to $10,000 soon. 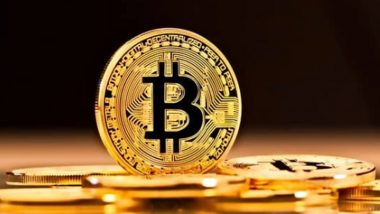 New Delhi, July 12: As Bitcoin hovers below $20,000 per digital coin, industry experts fear that the leading cryptocurrency may tumble to $10,000 soon.

Bitcoin, already down nearly 70 per cent from its record-high of $68,000 in November last year, has seen its worst-ever days in recent months amid the economic meltdown, leaving several crypto exchanges and trading platforms winding up operations, laying off people, and freezing fresh hirings. Cryptocurrency Crash: BlockFi, Crypto.com Lay Off Hundreds of Employees As Digital Currency Hits Record Low

A latest Bloomberg 'MLIV Pulse survey' has revealed that the Bitcoin price is heading back to $10,000.

Shark Tank's Kevin O'Leary has also stated that Bitcoin price has not hit bottom yet.

The Singapore government is also planning to introduce additional tough measures to safeguard consumers from the crypto meltdown, including restrictions on retail trading.

The European Union (EU) lawmakers this month passed a new legislation for tracing transfers of crypto assets like Bitcoin in the same way as traditional money transfers to prevent money laundering, terrorist financing and other crimes.

According to reports, Blockchain projects around Web3.0 lost more than $2 billion to hacks and exploits in the first six months this year.

The global cryptocurrency market lost at least $670 million in the April-June quarter (Q2), and 97 per cent of the losses were due to hacks and scams, another report said.

Meanwhile, top cryptocurrency broker Voyager Digital has filed for bankruptcy in the US, after top crypto hedge fund Three Arrows Capital (3AC) also filed for liquidation and then bankruptcy, in which Voyager has made significant investments, which the company is yet to get back.

The founders of bankrupt 3AC have vanished and the officials charged with liquidating the company were looking for their whereabouts.

Cryptocurrency exchange Vauld has announced to suspend all withdrawals, trading and deposits on its platform with immediate effect owing to "financial challenges".

The cryptocurrency exchange last month reduced its headcount by about 30 per cent amid volatile market conditions.

Singapore-based cryptocurrency exchange Bybit has laid off 2,000 employees while global crypto exchanges and firms including Coinbase, Gemini, Crypto.com and others announced to downsize their workforce.

Cryptocurrency lending platform Celsius has laid off 150 employees which is a quarter of its workforce.

(The above story first appeared on LatestLY on Jul 12, 2022 05:17 PM IST. For more news and updates on politics, world, sports, entertainment and lifestyle, log on to our website latestly.com).