Indian Firms To Hike Their Artificial Intelligence Spend by 10% in Three Years: Report

Nearly 87 per cent of enterprises in India are likely to increase annual artificial intelligence (AI) spending by more than 10 per cent in the next three years, a new report showed on Tuesday. 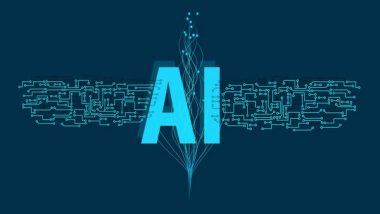 New Delhi, June 28: Nearly 87 per cent of enterprises in India are likely to increase annual artificial intelligence (AI) spending by more than 10 per cent in the next three years, a new report showed on Tuesday.

Approximately 80 per cent of enterprises in the country have at least one AI model in production, indicating an extensive penetration of AI/machine learning (ML) across enterprises. 87% of Indian firms to hike their AI spend by 10% in 3 years: Report. Artificial Intelligence is Creating New Opportunities Which Could Not Be Achieved by Traditional Technology, Say Experts

Within providers, too, 64 per cent have AI/ML as a core element for many of their products, as against 56 per cent of their global counterparts, according to the report by Bain & Company's, in collaboration with Microsoft and the Internet and Mobile Association of India (IAMAI).

"While the availability of data and cloud-based infrastructure have aided AI adoption, concerns related to data security, infrastructure, and management continue to be the most significant barriers for enterprises," said Velu Sinha, Partner, Bain & Company and co-author of the report.

The report was launched by Amitabh Kant, CEO, NITI Aayog, in the presence of top executives from the companies.

The thrust in AI adoption for enterprises is maximum in sectors such as communication, over-the-top (OTT) and gaming, technology, and financial services.

Further, more than 90 per cent of the digital native companies in consumer packaged goods (CPG) and retail and financial services have demonstrated AI/ML adoption.

Nearly 94 per cent of AI adopters are likely to increase the share of AI/ML-based applications in the upcoming three years, said the report.

Cloud platforms and internet of things (IoT) providers emerge ahead among the other segments of providers on the 'AI Maturity Index'.

More than 80 per cent of the AI/ML features introduced by cloud platforms in India reached production scale and exceeded the expected gains.

"AI offers a huge canvas for enabling homegrown innovation and we have an opportunity to make AI work at scale for India, enabling investment, job creation and inclusion for all," said Rohini Srivathsa, National Technology Officer, Microsoft India.

While Indian enterprises are keen to build their AI/ML models in-house, they exhibit a preference to buy the scale cloud infrastructure and AI work benches, which helps them to experiment at will on an elastic compute-storage enablement, the report mentioned.

(The above story first appeared on LatestLY on Jun 28, 2022 04:04 PM IST. For more news and updates on politics, world, sports, entertainment and lifestyle, log on to our website latestly.com).