20 Years Of Kabhi Khushi Kabhie Gham: Did You Know Abhishek Bachchan Had A 'Cameo' In This Karan Johar Multi-Starrer? (Watch Video) 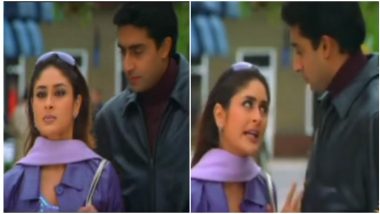 Karan Johar’s multi-starrer Kabhi Khushi Kabhie Gham aka K3G would soon be completing 20 years of its release. The film starring Amitabh Bachchan, Jaya Bachchan, Shah Rukh Khan, Kajol, Hrithik Roshan, Kareena Kapoor in the lead and Rani Mukerji in special appearance had hit the big screen on December 14, 2001. But did you know that another Bachchan member had a cameo in this blockbuster film? It is none other than Abhishek Bachchan! Mira Rajput Wants To Recreate This Iconic K3G Scene of Amitabh Bachchan-Jaya Bachchan With Hubby Shahid Kapoor (View Post).

Amitabh Bachchan and Jaya Bachchan’s son Abhishek Bachchan was supposed to make a cameo in K3G. He did shoot for it but that scene never made it to the final cut. When Dharma Productions released some deleted scenes of the film on its YouTube channel, Abhishek’s scene was a part of that special montage. He is seen approaching Kareena to ask the time but she assumes he wants to go with her for the prom party. The way Abhishek tells her that he’s not interested to be her partner at the prom and how she feels insulted will leave you in splits. Kabhi Khushi Kabhie Gham Gets a New Musical Rendition, All Thanks to Kajol's Cries, Watch Funny Edit Video.

Well, we just wonder why the makers of Kabhi Khushi Kabhie Gham couldn’t feature Abhishek Bachchan’s little role in the film that was 210 minutes long already. It was indeed a funny one!

(The above story first appeared on LatestLY on Dec 07, 2021 05:01 PM IST. For more news and updates on politics, world, sports, entertainment and lifestyle, log on to our website latestly.com).