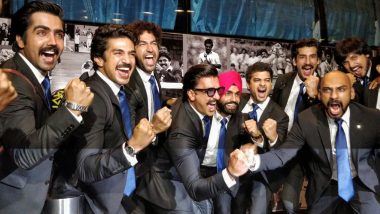 After giving a stellar performance in Gully Boy, Ranveer Singh now gears up for Kabir Khan's '83. The film is based on the much-celebrated India's win at the World Cup, under the captaincy of Kapil Dev. While Ranveer will be seen as Kapil Dev, the actors will portray the play of the rest of the cricketers. The star shared a montage of newspaper cut-outs of the time when this big win grabbed the headline. Know All About 1983 Cricket World Cup: History, Participants and Winner of the Third Edition of World Cup.

The match series was played in between June 9-June 25. India won the match against the powerful West Indies team. The entire nation was in awe of Kapil's 'Devils' and their performance on the field. Naturally, the media was all praises for team India and that is what showed in this small clip shared by the energetic star. Check it out below.

Recently, Ranveer,  Jatin Sarna, Adinath Kothare, Saqib Saleem, Dinker Sharma and other cast members of the film flew off to England. They went to shoot their schedule and practice along with the real-life cricketers who are also in England for ICC World Cup 2019. They were suited up in all-black as they imitated the players while leaving the country for the game. The pictures went viral in no time. As much as the desis are eager about the upcoming match, they are also excited for the reel-life match led by 'captain' Ranveer! Tell us your memories about the match in the comments section below.

(The above story first appeared on LatestLY on May 31, 2019 11:57 AM IST. For more news and updates on politics, world, sports, entertainment and lifestyle, log on to our website latestly.com).