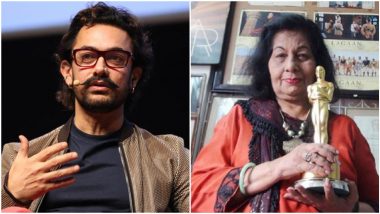 India's first Oscar winner, Bhanu Athaiya passed away at the age of 91 but her legacy will live on. The veteran costume designer was responsible for getting India its first Oscar for her work as a designer in Richard Attenborough's Gandhi. Her inspiring work was a reason why the fashion industry prospered in our country and she was a name well-respected in the fashion circle. She breathed her last in her sleep, as revealed by her daughter and while Twitterati was busy offering their condolences, Bollywood actor Aamir Khan has also reacted to her sad demise. Bhanu Athaiya Dies at 91: See Costume Designer's Oscar-Winning Moment For Gandhi and the Reason She Returned Her Academy Award (Watch Video).

"Bhanuji was one of those film people who beautifully combined accurate research and cinematic flair to bring to life the director's vision. You will be missed Bhanuji. My heartfelt condolences to the family," tweeted the PK actor while reacting to her sad demise. Aamir's tweet came in just hours after her demise was confirmed by her daughter. RIP Bhanu Athaiya: Netizens Mourn the Demise of Oscar-Winning Costume Designer (View Tweets).

Bhanuji was one of those film people who beautifully combined accurate research and cinematic flair to bring to life the director's vision.

You will be missed Bhanuji 🙏.

My heartfelt condolences to the family.

Bhanu Athaiya was very modest in her work and her humble soul will be remembered forever. In her Oscar-winning speech, she simply said, "It’s too good to believe. Thank you Academy and thank you, Sir Richard Attenborough, for focusing the world’s attention on India." Speaking of her Aamir's connection with the late costume designer, she had designer costumes for Ashutosh Gowariker's Lagaan, the one that starred Khan in the lead and had even bagged a nomination in the Best Foreign Movie category at Oscars.

We pray for her departed soul to rest in peace.

(The above story first appeared on LatestLY on Oct 15, 2020 11:30 PM IST. For more news and updates on politics, world, sports, entertainment and lifestyle, log on to our website latestly.com).