Abhay Deol in his latest Instagram post rants about Zindagi Na Milegi Dobara and revealed how awards show demoted him and Farhan Akhtar from main leads. Read on. 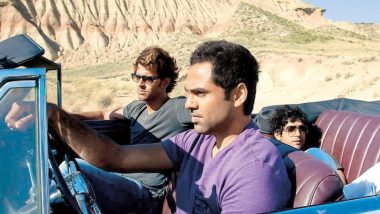 Bollywood actor Abhay Deol is someone from the industry who has always nailed it in the acting department. His performance in Zindagi Na Milegi Dobara as Kabir was a turning point in his career as he was praised by both audience and critics. Helmed by Zoya Akhtar, ZNMD released in the year 2011 and also starred Farhan Akhtar, Katrina Kaif and Kalki Koechlin in the same. Right from the trio's friendship to the chemistry between Hrithik Roshan and Katrina Kaif, the flick was a refreshing treat. However, looks like Abhay Deol is upset as his latest post highlighting the biasedness of award shows is a must-read. Abhay Deol Birthday Special: 5 Facts About This Dishy Actor You Are Not Aware Of.

Deol started his post by writing he needs chant the title of the film ZNMD everyday. Further, he narrated how he and Farhan were demoted by the awards show from main leads and were nominated as “supporting actors” for ZNMD. However, Hrithik and Katrina were nominated as “actors in a leading role”. He ended the rant by saying 'he of course boycotted the awards but Farhan was ok with it.' What Are The Odds? Teaser: Abhay Deol's Film Looks Quirky and Fresh (Watch Video).

“Zindagi Na Milegi Dobara”, released in 2011. Need to chant this title to myself everyday nowadays! Also a great watch when anxious or stressed. I would like to mention that almost all the award functions demoted me and Farhan from main leads, and nominated us as “supporting actors”. Hrithik and Katrina were nominated as “actors in a leading role”. So by the industry’s own logic, this was a film about a man and a woman falling in love, with the man supported by his friends for whatever decisions he takes. There are many covert and overt ways in which people in the industry lobby against you. In this case it was shamelessly overt. I of course boycotted the awards but Farhan was ok with it. #familyfareawards Very creative artwork @kalakkii

Everytime this man speaks it makes so much sense and this time too his words might be painful for the industry wallahs, but it's an eye-opener for many. Indeed, Sushant Singh Rajput's death has led to a new kind of energy which ain't wrong. Coming back to Deol's post, we can feel him and how. Stay tuned!

(The above story first appeared on LatestLY on Jun 19, 2020 05:55 PM IST. For more news and updates on politics, world, sports, entertainment and lifestyle, log on to our website latestly.com).