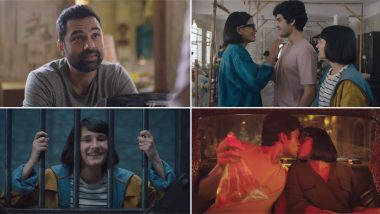 Abhay Deol has launched the teaser of his next production venture, What Are The Odds? From the first look, the movie looks pretty quirky and interesting. The story follows, high spirited Vivek, played by Yashaswini Dayama (Phobia, Dear Zindagi, Made in Heaven, Delhi Crime), with a criminal bent of mind, and well-behaved head boy Ashwin played by Karanvir Malhotra (The Forgotten Army, Selection Day). “40 yr olds date teenagers all the time," Vivek says at the beginning of the teaser, setting the discourse right off the bat. Abhay Deol Birthday Special: 5 Facts About This Dishy Actor You Are Not Aware Of.

What are the Odds is the directorial debut for Megha Ramaswamy. The movie will be released digitally. Although, it is not revealed on which platform. Jungle Cry: Abhay Deol Elated About the Global Theatrical Release of His Rugby Film.

Watch The Teaser Of What Are The Odds Here:

The movie looks pretty quirky. And despite being a coming-of-age story, which has been told so many times now, this one manages to look fresh. We will wait for the trailer to come out for a better picture. Although, the teaser makes it seem like that Abhay will be in a lead role, but his role is probably a supporting one.

(The above story first appeared on LatestLY on May 15, 2020 02:37 PM IST. For more news and updates on politics, world, sports, entertainment and lifestyle, log on to our website latestly.com).

Comments
Tags:
Abhay Deol Karanvir Malhotra What Are The Odds Yashaswini Dayama
Comments
You might also like