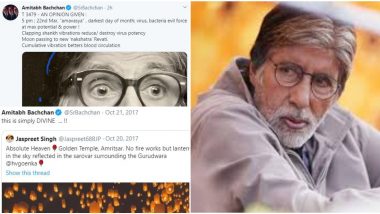 At the time of writing this article, Amitabh Bachchan has 40.5 million followers on Twitter, 29 million on Facebook and 14.5 million on Instagram. And we are not even talking about the millions of fans he has that go beyond the confines of social media. For that, you have to stand outside his house on a Sunday morning and see the kind of crowds that gather there to have a glimpse of the Bollywood legend. That's the kind of reach and influence Amitabh Bachchan has over a major part of the public in India. Amitabh Bachchan, Deepika Padukone, Ranveer Singh, Akshay Kumar & Others Clap To Thank The COVID-19 Fighters On Janata Curfew.

So imagine what happens when the superstar inadvertently uses this kind of influence to spread fake news. We are not sure if he is truly ignorant of the veracity of the information he is giving out, but in our hearts, we like to believe that Amitabh Bachchan is blissfully unaware of what he is putting out. But at times, it can be harmful. Like his recent tweet on Coronavirus. Amitabh Bachchan Falls Prey To FAKE ‘Amavasya’ WhatsApp Forward Claiming Clapping and Clanging Utensils Could Kill Coronavirus (View Post).

As we are pretty sure you are aware, the entire world is at the grip of the Coronavirus outbreak. So any kind of wrong information being put it, is as harmful as the virus itself. But someone forgot to tell Mr Bachchan about the same.

Amitabh Bachchan has been a very vociferous supporter of PM Narendra Modi's Janata Curfew initiative and he had joined many others to clap and clang utensils at 5pm on March 22. He even cheered the event, saying that 'we are ONE...and we have WON', despite the fact that soon videos came out where people took to the streets to 'celebrate' the end of curfew, thereby defeating the purpose of social distancing.

At 5pm March 22nd the entire nation came out & applauded

NEVER SEEN ANYTHING LIKE THIS ! PROUD TO BE AN INDIAN - JAI HIND pic.twitter.com/Kb07wsVxew

Sometime back, he put out another tweet that gives a superstitious spin to the whole 'clapping angle'. 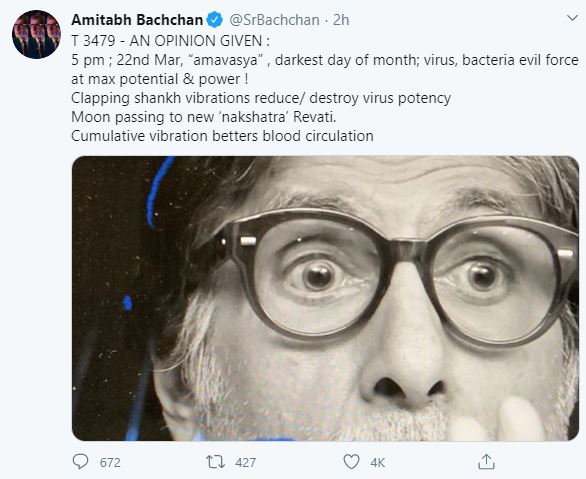 In the tweet, he gives an 'Opinion' that claims that since march 22 happens to be amavasya, the darkest day of the month, clapping and shankh vibrations reduce virus potency. That tweet is wrong on quite a few counts. Like, March 22 isn't when amavasya is happening; it's actually happening between March 23  and 24. Secondly, PIB has done a fact check on the above claim and it is proven to be false. Janata Curfew: Clapping and Clanging Utensils Will Not Kill Coronavirus, PIB Fact Check Debunks Fake Messages.

Amitabh Bachchan, later, went on to delete the tweet, after receiving flak on social media, but that's not the only fake news he has tweeted. Here are four other times when the Bollywood legend posted fake news, pictures and videos, oblivious of the veracity of the info in it.

On June 26, 2019, Amitabh Bachchan retweeted a video claiming that NASA had made a rain clouds generator, with the caption, 'Can we get one in India?' 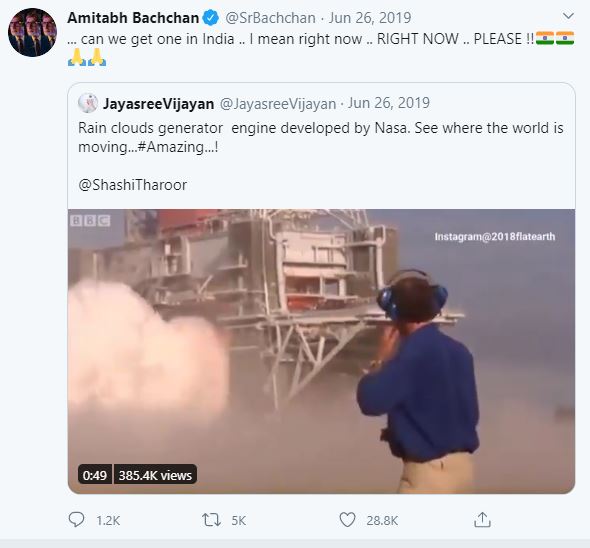 In reality, that clip was about testing of rocket engines taken from an extract from the BBC show Top Gear in 2010.

In October 23, 2019, Amitabh Bachchan retweeted a video that showed a cameraman beating a racer in speed while trying to film him.

In reality, that was just an ad, and not an actual running race.

On November 20, 2019, Amitabh Bachchan fell for another infamous viral video that shows a group of Chinese girls dancing in astonishing 'sync'. He expressed his amazement with the caption, 'wow .. even their locks of hair move in sync'.

wow .. even their locks of hair move in sync .. https://t.co/5OxltjyNZz

You don't even need the services of a fact-checker to see that it is a clearly edited video that shows one girl as many through replication.

Like with the previous tweet, Amitabh Bachchan had earlier fell for another fake story shared by the same Twitter user, Jaspreet Singh, who is a BJP worker. On October 21, 2017, Jaspreet shared a picture of lanterns in the sky taken at 'Golden Temple'. AB captioned the picture as, 'this is simply DIVINE ... !!'.

Divine? Yes. True? Not so much! In this case, the person who edited this fake picture himself came out and busted the bubble.

Unlike the Coronavirus tweet, Amitabh Bachchan has not bothered to take down the other fake news and pictures, despite being pointed out by fact-checkers. The funny part here is that Amitabh Bachchan, himself, has been a victim of so many fake news and death hoaxes, so we expected him to be more responsible about the kind of news he puts out.

While we love the fact that Mr Bachchan is one of the most active celebs on social media, especially at his age, and most of his posts are positive in nature, he should keep a filter in on the kind of fake news that come up. Like they say in the Spider-Man movies, 'With great powers, comes great responsibility'!

(The above story first appeared on LatestLY on Mar 23, 2020 03:22 PM IST. For more news and updates on politics, world, sports, entertainment and lifestyle, log on to our website latestly.com).