Amrita Rao gave birth to her son on November 1. Her Main Hoon Na director Farah Khan congratulated the couple on Twitter. The filmmaker called it the best news in the longest time. 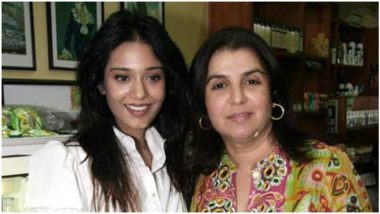 Amrita Rao gave birth to her son on November 1. Her Main Hoon Na director Farah Khan congratulated the couple on Twitter. The filmmaker called it the best news in the longest time. "Amrita Rao and RJ Anmol welcomed a baby boy this morning. Both the mother and baby are healthy and doing well. The family is ecstatic and both Amrita and RJ Anmol thank everyone for their wishes and blessings," a statement issued by the couple's publicist said. Amrita Rao Shares a Video Caressing Her Baby Bump, Looks Resplendent in a Red Saree for Navratri Celebrations!

Earlier, Amrita had talked about starting the new journey of motherhood. She has said, "I have heard that with babies every few months there is a landmark transition. You are perpetually about discovering new things. Yes, I am nervous about the idea of motherhood but the saying is true- when you see your baby's face the mother in you effortlessly awakens. I am looking forward to being a friend to this little wonder in my life." Amrita Rao Makes Pregnancy With RJ Anmol Instagram Official, Shares An Adorable Post.

Many congratulations to @AmritaRao &@rjanmol on the birth of their baby.. happiest news in a long time♥️♥️♥️

When Amrita's look as Meena Tai for Thackeray had released online, Farah was the first person to congratulate the actress. When Farah was working on Satte Pe Satta remake, Amrita had said, “I would love to work with Farah (Khan) again," adding, "Satte Pe Satta is a fabulous film. It’s almost like The Sound Of Music of Hindi cinema. I would love to be a part of a film like that,”

Main Hoon Na was a breakthrough film for the actress. Amrita played Sanjana, a Boho hipster girl who transforms into the beauty queen of the college, only to maker her crush realise that changing so drastically for love should not be part of the deal. She starred alongside Shah Rukh Khan and Sushmita Sen in the film. Coincidentally, SRK and Amrita's baby's birthday are only one day apart now.

(The above story first appeared on LatestLY on Nov 02, 2020 11:10 AM IST. For more news and updates on politics, world, sports, entertainment and lifestyle, log on to our website latestly.com).