Amyra Dastur Urges Everyone To Stop Attacking Doctors; Says 'Can't Imagine What I Would've Done if I Had Lost My Father'

Amyra Dastur's father battled COVID-19 and its related complications heroically. The actress is glad that her father is now recovering and has urged everyone to not attack the doctors. She can't believe what would have happened to her father had it not been for these doctors. 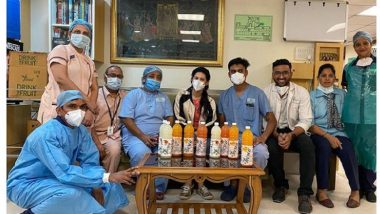 Actress Amyra Dastur on Saturday shared a social media note talking about her father's experience with Covid-19. She says she'll never forget the feeling of utter terror and helplessness.  Amyra Dastur: I Am Happy To See Where My Career Is Going

Amyra posted a string of pictures with doctors and healthcare workers. Alongside the image, she wrote: "My father was admitted into hospital on the 12th of May 2021. What started off as fever and a cough developed into pneumonia caused by covid (even though all his tests were negative). His O2 dropped and his body began deteriorating to the extent he had to be shifted into the ICU. It was touch and go over that weekend." Amyra Dastur: Thanks to OTT, People Don’t Get Work Because of Their Last Name

The actress said that she will never forget that feeling of helplessness.

Amyra then spoke about violence against doctors. "I just want to end this post by requesting everyone not to harm doctors or nurses. As someone who's been on the other side, seeing their loved one almost taken from them, I can only try to imagine the pain some families have gone through. I can't imagine what I would've done if I lost my father but attacking doctors and nurses surely isn't fair."

She concluded: that they truly are working their hardest and they need our support.

(The above story first appeared on LatestLY on Jun 05, 2021 07:36 PM IST. For more news and updates on politics, world, sports, entertainment and lifestyle, log on to our website latestly.com).