Ananya Panday And Kartik Aaryan Undeterred By Romance Rumours, Actress Says, 'It Has Not Made Any Difference To Our Lives'

Ananya Panday is currently rumoured to be dating Pati Patni Aur Woh co-star Kartik Aaryan. But Ananya added that she and Kartik are undeterred by the speculations. Actress says that they laugh about the rumours and the bond they share is evident with the chemistry in the film. 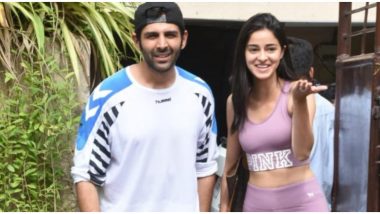 At just 21 years of age, Ananya Panday has achieved a level of stardom that is enviable. She has only featured in Student of the Year 2 so far, with her next film, Pati Patni Aur Woh, inching closer to release. With stardom also comes this thing called 'link ups'. The actress is currently rumoured to be dating PPAW co-star Kartik Aaryan. The speculations began right after her appearance on Koffee with Karan. But are they really dating? Not that two actors in Bollywood would ever admit to it (Exception being Ali Fazal-Richa Chadha and Pulkit Samrat-Kriti Kharbanda). But Ananya added that she and Kartik are undeterred by the speculations.

In a recent interview Ananya opened up: "I have said it in the past that I find Kartik cute and like spending time with him. I am not going to stop it because of what is appearing in the news. I and Kartik laugh about the rumours. It has not made any difference to our lives. I would never talk about my personal life. I don't feel the need to. Kartik and I share a great bond and that is evident in the chemistry in the film."

Bhumi Pednekar, another lead of PPAW, joked, "As far as I am concerned, well, I am third-wheeling with them."

Ananya will be next seen in Khaali Peeli, a romantic film with Ishaan Khatter. Talking about her role in the film, she said, "I play a girl from Mumbai in the film and so, I will be seen speaking in the Bambaiya language. It’s similar to what Alia (Bhatt) did in Gully Boy. I don’t know if I can be as good as Alia, but I will definitely try to match up to her."

After Pati, Patni Aur Woh, Kartik will be seen in Imtiaz Ali's yet-untitled film (rumour has it that the movie is named Reverse or Aaj Kal). Interestingly, during the course of the shooting this one, Kartik was linked to co-star Sara Ali Khan. Well, take dating rumours with a pinch of salt. That is the lesson for fans and celebs, here.

(The above story first appeared on LatestLY on Dec 01, 2019 08:41 PM IST. For more news and updates on politics, world, sports, entertainment and lifestyle, log on to our website latestly.com).