Ananya and Bhumi were candid about the film, love and life in general. Here, they finally addressed the elephant in the room. While Ananya refuted the dating rumours calling Kartik as her 'friend,' Bhumi kind of confirmed it! 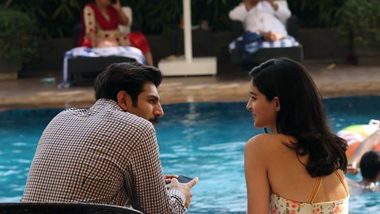 Bhumi Pednekar, Ananya Panday and Kartik Aaryan are all set for their entertaining release which is Pati Patni Aur Woh! The remake of the classic Sanjeev Kumar film is getting a modern-day twist with these newbies of the Bollywood block in the lead. But what's more in the news is the chemistry between Ananya and Kartik! There have been rumours since many months that the duo has been dating each other. While most of the fans were convinced it was Sara Ali Khan who was dating Kartik, their recent break up has again brought the Student Of The Year 2 actress' name on top! To top this all, their co-star Bhumi also added fuel to the speculations! Govinda Feels Kartik Aaryan, Bhumi Pednekar And Ananya Panday In The Ankhiyon Se Goli Mare Remix Are Clueless?.

In a recent interview with Bombay Times, Ananya and Bhumi were candid about the film, love and life in general. Here, they finally addressed the elephant in the room. While Ananya refuted the dating rumours calling Kartik as her 'friend,' Bhumi kind of confirmed it!

When the 21-year-old actress was asked about her equation with Kartik, she simply said, "Even if there are rumours, I will not stop hanging out with him. He is my friend and costar. I am going to chill and spend time with him. We didn’t know each other before we started working on this film. We both talk a lot." However, Bhumi chipped in saying, "As far as I am concerned, well, I am third-wheeling with them."

Of course, Ananya was 'irritated' with Bhumi's statement and went ahead to claim that she is very much single! Yet again, the speculations are on the cliffhanger, leaving the fans perplexed about the whole Sara-Kartik-Ananya scenario. Speaking about the flick, the Mudassar Aziz directorial is hitting the silver screens on 6 December 2019.

(The above story first appeared on LatestLY on Dec 01, 2019 09:58 AM IST. For more news and updates on politics, world, sports, entertainment and lifestyle, log on to our website latestly.com).