Anek is one of the most-anticipated movies of the year. Written and directed by Anubhav Sinha, the film features Ayushmann Khurrana in the lead. 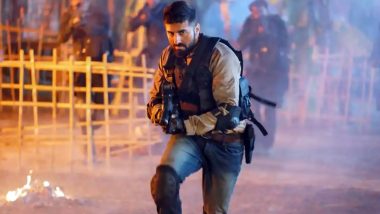 Anek is one of the most-anticipated movies of the year that movie buffs are looking forward to watch on the big screens. Written and directed by Anubhav Sinha, the film features Ayushmann Khurrana in the lead. Fans would once again get to watch him in a different avatar. He has slipped into the shoes of an undercover cop with this political action thriller. Anek: Ayushmann Khurrana Shares A Picture With Co-Star Andrea Kevichusa With The Sweetest Caption.

Anek that features a fantastic star cast is produced under the banners of T-Series and Benaras Mediaworks. There’s just few days left for its theatrical release. Ahead of it, let’s take a look at some of the key details of the film. Anek Trailer: Ayushmann Khurrana’s Thriller From Anubhav Sinha Explores North-East Conflict and Unfolds Story of an Indian Fighting for Nation’s Peace.

Plot – Anek is set against the geo-political backdrop of North East India. It showcases how an undercover cop is on a mission ‘to restore peace in the North Eastern region of India’.

Watch The Trailer Of Anek Below:

Release Date – Anubhav Sinha’s film is all set to be released in theatres on May 27.

Reviews – Anek reviews are out. Click here to read what Sreeju Sudhakaran of LatestLY has to say on Ayushmann Khurrana’s film.

(The above story first appeared on LatestLY on May 24, 2022 05:20 PM IST. For more news and updates on politics, world, sports, entertainment and lifestyle, log on to our website latestly.com).