Anmol Malik Birthday: A Look At The Popular Songs Sung By The Bollywood Singer!

Anmol Malik, daughter of ace music composer and singer Anu Malik, started her musical career at a very young age. She was only five when she recorded her first song. 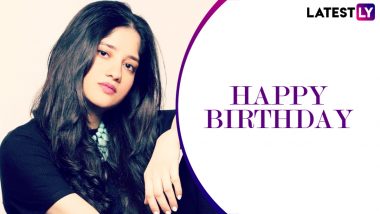 Anmol Malik, daughter of ace music composer and singer Anu Malik, started her musical career at a very young age. She was only five when she recorded her first song and from then on she recorded several songs as a child artist. If you remember the track “Mujhe Maaf Karna” from Biwi No 1, the song was sung by her and composed by her father. Then it was in 2006 when Anu Malik launched his daughter Anmol’s singing career with the track “Bitiya Na Kijo”. Anu Malik’s Daughter Anmol Debuts as an Author, Launches Her Brand New Novel ‘Three Impossible Wishes’.

Anmol Malik has sung some amazing songs over the years. Her vocal range, style of singing has left every music lover impressed. On the occasion of her birthday, let’s take a look at some of her popular tracks.

Talli – This song is from the comedy film Ugly Aur Pagli featuring Ranvir Shorey and Mallika Sherawat in the lead. Anmol along with Hard Kaur, Mika Singh and JJ sung the remix version of the party track “Talli”.

These are some of the popular numbers crooned by birthday girl Anmol Malik. We wish a very happy birthday and a wonderful year ahead!

(The above story first appeared on LatestLY on Feb 05, 2021 08:20 AM IST. For more news and updates on politics, world, sports, entertainment and lifestyle, log on to our website latestly.com).