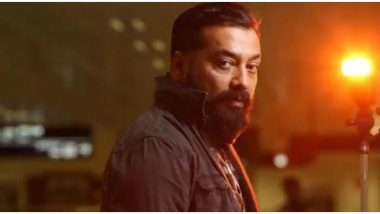 Anurag Kashyap has landed in fresh trouble. A Telugu actress has accused the filmmaker of sexual assault on Twitter. She has said that the filmmaker forced himself on her badly. She tweeted out to PM Narendra Modi and sought help. The actress called Kashyap a demon in the skin of a creative guy and expressed that she's concerned about her safety. With that, the #MeToo movement has been relaunched in the Indian film industry. Twitterati has been calling out the filmmaker using the hashtag. Extending support to the alleged victim is also Kashyap's former friend Kangana Ranaut. Rhea Chakraborty Claims'#MeToo Allegations Involving Sanjana Sanghi Destroyed Sushant Singh Rajput's Mental Sanity (Details INSIDE).

Kangana said that every voice matters, added the #MeToo hashtag and demanded for the filmmaker's arrest. Many other Twitter users have also launched the same attack on the Gangs of Wasseypur filmmaker.

The actress who has accused Kashyap had also hinted his name in an interview a little while ago. In an interview with a TV channel, she had said that that a filmmaker in Mumbai invited her to his room, where he showed her an adult film. When she resisted, he called it normal and said many girls have spent a good time with him. The allegations are shocking  but unverified at the moment. Shama Sikander On #MeToo Movement: I Was the First One to Speak About Casting Couches. 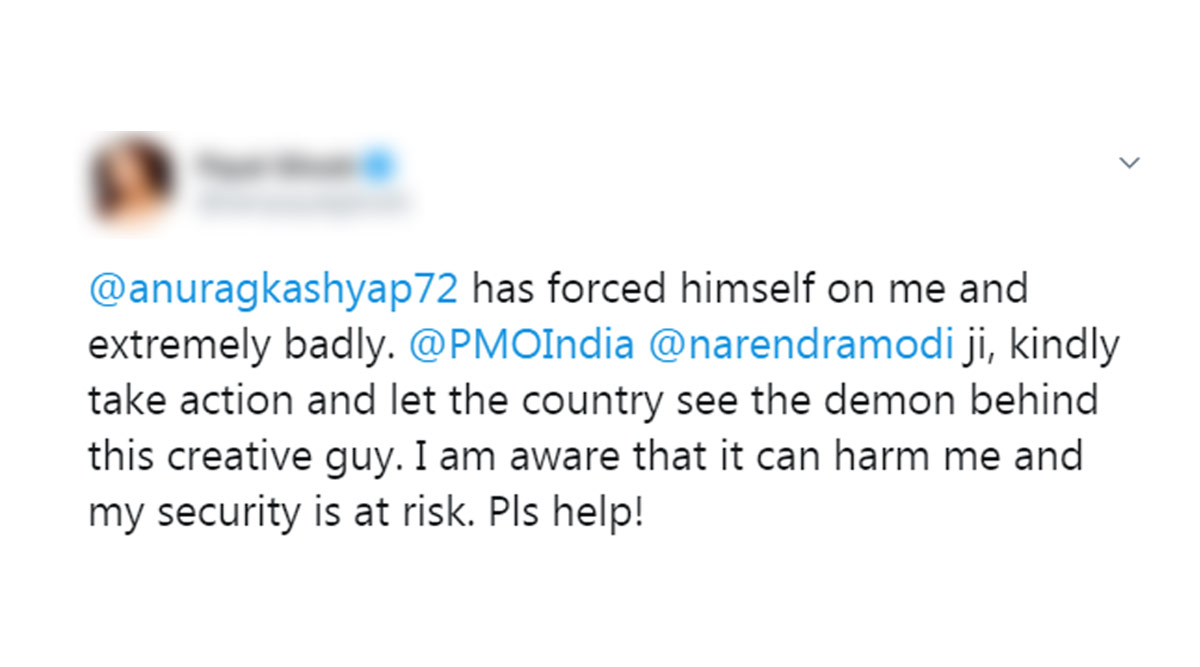 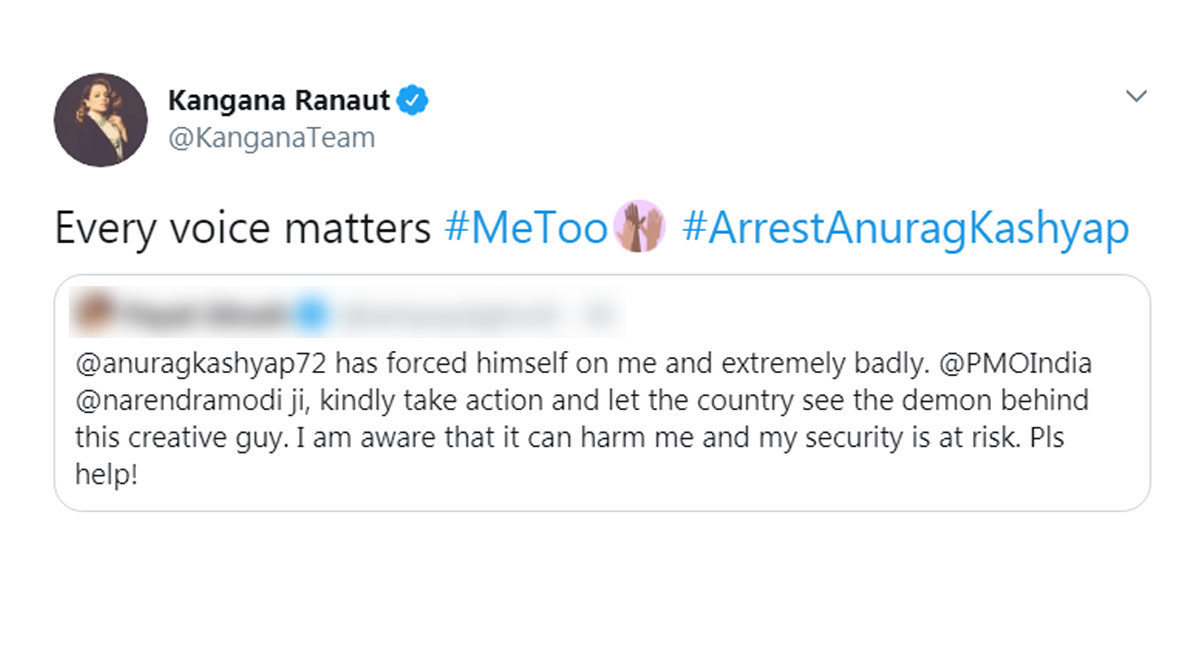 "Believe women. A woman risks everything when she goes public. Give her respect. Trust her."

"Ok! A woman has gone public accusing @anuragkashyap72 for rape."

#ArrestAnuragKashyap the sexual predator. Women are unsafe with him present in the society.— Madhur (@ThePlacardGuy) September 19, 2020

In 2018, the first wave of the #MeToo movement hit the Indian film industry. Tanushree Dutta had accused Nana Patekar of misbehaving with her. Anurag Kashyap's partner in business Vikas Bahl was also accused by a woman of sexual assault. The woman also called out Kashyap for brushing the matter under the carpet, and the uproar eventually led to the dissolution of their production house, Phantom Films. Kashyap also stepped down from the Mumbai Academy of Moving Image (MAMI) board of members.

Kashyap had talked about the movement in December 2018. He said, "The whole MeToo movement in India started off and it was so strong, it was affecting change. And then, today, everybody talks about Rakhi Sawant who is just seeking attention and does nothing more than that. And everything goes astray and everybody stops bothering about it."

Most of the names that surfaced in the wake of the #MeToo movement continue to work in the film industry. Anu Malik was appointed as the judge on Indian Idol. Vikas Bahl's name as the director of Super 30 was reinstated after being given a clean chit in an internal enquiry held by the studio.

(The above story first appeared on LatestLY on Sep 19, 2020 10:45 PM IST. For more news and updates on politics, world, sports, entertainment and lifestyle, log on to our website latestly.com).