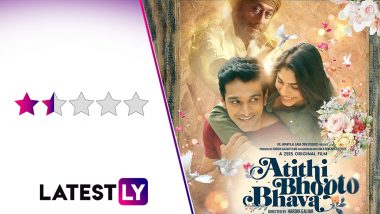 Atithi Bhooto Bhava Movie Review: In Hardik Gajjar's Atithi Bhooto Bhava, there is a ghost story and a reincarnation tale rolled into one. And it has Jackie Shroff play the titular ghost for what feels like a recurring motif now, what with Murder 2, Bhoot Unkle and maybe in the upcoming Phone Bhoot. There is also the talented Pratik Gandhi, who seems not to catch a good break after an outstanding success as a performer in Hansal Mehta's Scam 1992. Sadly, for Pratik, Athithi Bhooto Bhava will continue that dry run for him in terms of being an exemplary project worth his talent. Atithi Bhooto Bhava Trailer: Jackie Shroff, Pratik Gandhi, Sharmin Segal’s Film to Premiere on September 23 on ZEE5.

Srikant (Pratik Gandhi), a standup comedian, and Netra (Sharmin Segal), an air-hostess are in a live-in relationship but they seem to off their honeymoon period. Netra feels Srikant is not romantic enough and doesn't exactly understand her needs. Srikant, while he makes her food and all, still is a misogynist and makes jokes about her in his standup routines.

One night after a fight with her and then a drunken trip to pub, Srikant encounters Makhan Singh (Jackie Shroff), under whose banyan tree he had urinated, and then brings him home. It's only in the morning that Srikant realises that his new 'atithi' has no plans to leave and what's more, he is a ghost. And Makhan Singh believes Srikant is the reincarnation of his dead grandfather, and he pleads Srikanth to help him fulfil his incomplete last wish.

Atithi Bhooto Bhava has a story that does have a heart even if it lacks in originality. Movies where ghosts seek the help of mortals who could sense them to meet their living loved ones goes beyond the one where Patrick Swayze and Demi Moore had sexy times making pottery in Ghost. There is also a touch of Finding Fanny, about an old man seeking his old love without knowing what she is upto these.

However this plotline here did raise a major question for me. If Makhan knew where his old flame lived, why did he never bother to seek her out when he was alive? The reasons for him living his home in Varanasi and coming to Mumbai felt more of a plot contrivance rather than actual necessity. Anyway this gives the trio of protagonists an opportunity to go on a road trip to find her, and they are joined by Srikant's friend Suruchi (Divinaa Thackur), who has precious little to do in the plot otherwise.

Atithi Bhooto Bhava might have a familiar premise, but it could have done wonders with that plot with its writing and direction. Unfortunately that's where the film falters. The direction feels raw at times, there are scenes where I felt actors were waiting for a cue to react to a particular instance or dialogue, the reaction time going a second tad longer. At times, transition scenes and editing cuts feel jarring. Like there is a scene where Srikant slaps his forehead and sits down on the floor, but on the way, the transition suddenly becomes slo-mo before it reverts to normal. Thankfully, such instances are little when the road trip begins. Jackie Shroff, Sanjay Dutt, Mithun Chakraborty Go Goofy Over Co-Star Sunny Deol Bunking First Day Shooting of Their Next (View Pic).

On the other hand, the writing lacks logic (even for a ghost story) and the comedic bits are, well, unfunny, which is irksome for a movie where one of the protagonists is a standup comedian. We also do not engage much either with Srikant-Netra's track, because neither of the characters lack the verve to make us truly empathise with their problems and are often annoying. Or with Makhan's love story, because the backstory, as I mentioned before, doesn't feel convincing enough. There is also a detour during the road trip to Suruchi's house, which also don't add much to the plot save for her forlorn ex's yearning for her and some dad jokes.

That said, there is a scene near the climax where Srikant and Makhan bond in the dilapidated ruins of what used to be their home once. It is quite heartfelt, and both the actors are lovely here. More such scenes and Atithi Bhooto Bhava would have been a decent enough watch.

As for the performances, Pratik Gandhi continues to shine above the material here, doing the best he can. It is impressive to see him handle Punjabi and a Maharashtrian lingos effectively (I believe it was, I am no master of accents). Jackie Shroff's child-like performance may make sense, because even though Makhan is in his '50s, he believes he has returned to his youth, back with his grandfather and on the way to meet his first love. Both Sharmin and Divinaa are decent, and both are let down by the writing around their characters.

- The Screenplay and Execution Should Have Been Better

With a lack of freshness in both its script and direction, Atithi Bhooto Bhava fails to impress in spite Pratik Gandhi's spirited act. This supernatural road trip runs out of gas much before you start on the ignition. Atithi Bhooto Bhava is streaming on Zee5.

(The above story first appeared on LatestLY on Sep 23, 2022 10:31 AM IST. For more news and updates on politics, world, sports, entertainment and lifestyle, log on to our website latestly.com).