Ayushmann interacted with Babil during the award function and it was an emotional moment for all when Ayushmann presented Irrfan's award to Babil. The Hindi Medium actor was posthumously honoured with the Lifetime Achievement Award. 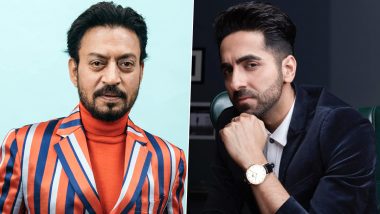 Ayushmann Khurrana often spends his free time writing and he also shares his work with his fans on social media. The actor recently met late actor Irrfan Khan's son at an award function and it made him pen an emotional note for the actor. Irrfan's son Babil Khan had arrived at the Filmfare Awards on Saturday to receive awards on behalf of his late father. The Hindi Medium actor was posthumously honoured with the Lifetime Achievement Award and Best Actor in a Leading Role for his last release, Angrezi Medium. Irrfan Khan’s Son Babil Khan Will ‘Start Looking into Offers’ for Films After May.

Ayushmann interacted with Babil during the award function and it was an emotional moment for all when Ayushmann presented Irrfan's award to Babil. Talking about the same, Ayushman shared a picture of Irrfan's mural in Bandra on Instagram and penned down an emotional note for him. An excerpt of the caption read, "This is somewhere in Bandra. But he is somewhere resting in peace. Celebrating his double win. Forever Irfan! Best Actor (male) and the lifetime achievement award!"

Earlier, opening up about his career, Ayushmann had said, "It is truly humbling to know that the people of India find me relatable. It's a huge compliment because I do consider myself to be one of the masses, and my career journey is the same as every Indian who is trying to make a name, build a legacy through pure dedication and hard work." Khurrana on Saturday (March 20) announced the wrap-up for his upcoming spy-thriller film Anek, for which he had been shooting in Delhi and North-East India. Ayushmann Khurrana’s Anek To Release On September 17!

Talking about Babil, he hinted at plans of joining the film industry soon. While Babil remained tightlipped about how he plans to follow his father's footpath into Bollywood, he recalled his father's work and treated Irrfan's fans with a still from Maqbool on Instagram. Irrfan died in April last year after a two-year battle with neuroendocrine tumour. He was last seen on screen in Homi Adajania's Angrezi Medium.

(The above story first appeared on LatestLY on Mar 28, 2021 11:02 AM IST. For more news and updates on politics, world, sports, entertainment and lifestyle, log on to our website latestly.com).