Ayushmann Khurrana Reveals Why Films Like Vicky Donor, Dum Laga Ke Haisha Are Special to Him

Ayushmann Khurrana credits his films Vicky Donor and Dum Laga Ke Haisha for triggering his journey to stardom. He says such films have been the voice of his beliefs and sensibilities. 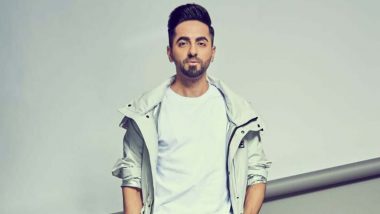 They wanted to have a conversation, have a debate and take back an uplifting message home," said Ayushmann. He says such films have been the voice of his beliefs and sensibilities, and have enabled him to "write my own destiny in this industry". Anek: Anubhav Sinha Shares His Pic from the Sets of Ayushmann Khurrana Starrer, Calls It 'Toughest' Film So Far.

"I never looked back after Dum Laga Ke Haisha and so, it will always be a super special one for my career, for my life. It bolstered my belief that I was on the right path of selecting films that spark a conversation. I will forever be indebted to Adi (producer Aditya Chopra) sir, (producer) Maneesh Sharma and (director) Sharat Katariya for bringing this film to me," he added.

Ayushmann says films like these shaped "my position as an artiste who wants to walk the road less travelled and constantly experiment with genres and subjects".

(The above story first appeared on LatestLY on Feb 28, 2021 11:45 AM IST. For more news and updates on politics, world, sports, entertainment and lifestyle, log on to our website latestly.com).