Ayushmann Khurrana's Article 15 has another reason to rejoice and that's because the film has won a special audience award at the tenth edition of the London Indian Film Festival. Article 15 opened the festival this year and it left everyone impressed with its s highly contemporary story. Read on to get more details about this award. 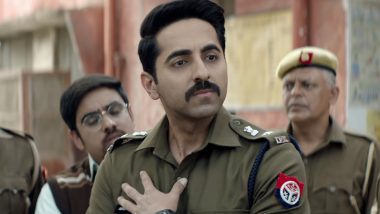 Anubhav Sinha's Article 15 is on a roll currently. The film took off with rave reviews from the critics and is now being lauded by the audiences too for its great subject and performances. The Ayushmann Khurrana starrer has started well at the Indian box office as well and all in all, it looks like nothing can keep a film from being a success if there's good content. There's another big news that's come in which is sure to get the makers thrilled. The film has won an audience award at the London Indian Film Festival 2019. Article 15 Box Office Collection Day 3: Ayushmann Khurrana's Latest Offering Does Well Over the Opening Weekend, Earns Rs 20.04 Crore.

Article 15 opened the tenth edition of LIFF, which is considered to be Europe’s largest South Asian film festival. The festival this year focussed on the themes of Diversity and equality. Speaking to Variety, director Anubhav Sinha expressed his happiness and said, "I am so happy that the film actually connected with Indians abroad and with non-Indians alike, who are not facing this version of inequality on a daily basis."

The film stars Ayushmann Khurrana in the role of a cop, working on a case that turns out to be an eye-opener given the relation to the role of caste in the crime committed. The film mainly focusses on the relevance and importance of Article 15 of the Indian Constitution, which prohibits discrimination on grounds of religion, race, caste, sex or place of birth in today's time.

The Ayushmann Khurrana starrer Article 15 released on Friday (June 28) in India and is currently running in theatres. The film has collected over Rs 20 crores in its opening weekend at the box office so far.

(The above story first appeared on LatestLY on Jul 01, 2019 04:15 PM IST. For more news and updates on politics, world, sports, entertainment and lifestyle, log on to our website latestly.com).