A source close to the development told Bollywood Hungama that the makers might opt for an online release of the film on Amazon Prime Video. Various prospects about the film are being discussed currently. 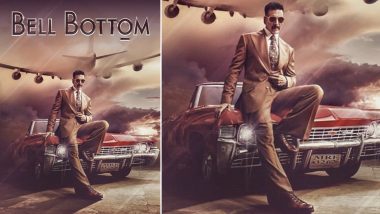 Bell Bottom starring Akshay Kumar and Vaani Kapoor has been in the news for the longest time now. The crew was the first one to fly abroad and shoot for the film post the lockdown lifted and they wrapped it up without any casualties happening. The makers have been sharing updates about the film from time to time to keep the fans excited for the film. The teaser of the film was well-received by the audience as well but while makers had a plan to release the film in theatres, there might be a chance that they will take the OTT route. Bell Bottom Story Revealed! Akshay Kumar's Rescue Mission Will Involve Saving Indians on Board a Hijacked Plane.

A source close to the development told Bollywood Hungama that the makers might opt for an online release of the film on Amazon Prime Video. Various prospects about the film are being discussed currently and only after the team strikes a suitable deal, they will make the decision. “The producers of Bell Bottom – Jackky Bhagnani and Vashu Bhagnani – have started conversations with Amazon Prime to explore the possibility of a direct to digital release, and so far, both the parties seem to be on the same page. There might be some clarity within the next month, ” said the source.

The source further revealed that the release date of the film will probably be shifted as well.  “A release on April 2 seems unlikely now, as another Akshay Kumar film (Sooryavanshi) is looking to arrive in the same period. Given the costs and several other factors associated with the film as also Akshay’s jam packed release calendar, the makers thought of exploring the digital release with Amazon Prime." The source also added that the producers have a great rapport with the digital platform and so does Akshay and that’s how the meeting happened. "All stakeholders are currently working towards arriving at terms and conditions that are beneficial to all of them.” says the source. Bell Bottom: Akshay Kumar, Vaani Kapoor, Huma Qureshi and Lara Dutta to Begin Filming in the Uk From August.

The film is a hijack drama where we will see Akshay essay a titular role of a spy and Vaani Kapoor will be his leading lady. Kumar's mission in the movie is to save 212 Indians on board a hijacked plane. The film also stars Lara Dutta and Huma Qureshi in pivotal roles. The spy-thriller film is written by Aseem Arrora, Parveez Sheikh and directed by Ranjit M Tewari. The film is slated to be released on 2 April 2021 in cinemas.

(The above story first appeared on LatestLY on Jan 20, 2021 03:55 PM IST. For more news and updates on politics, world, sports, entertainment and lifestyle, log on to our website latestly.com).