Varun Dhawan and Kriti Sanon met Arunachal Pradesh Chief Minister Pema Khandu before commencing the shoot for their new horror comedy Bhediya, along with the films unit. The film is slated to release in cinemas on April 14, 2022. 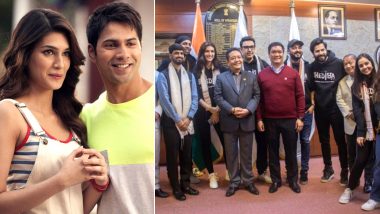 Jio Studios & Dinesh Vijan present, Bhediya, which is slated to release in cinemas on April 14, 2022.

(The above story first appeared on LatestLY on Mar 04, 2021 04:06 PM IST. For more news and updates on politics, world, sports, entertainment and lifestyle, log on to our website latestly.com).