The upcoming horror comedy Bhool Bhulaiyaa 2 is the sequel to Priyadarshan’s 2007 released film Bhool Bhulaiyaa. This sequel, directed by Anees Bazmee, will feature Kartik Aaryan, Kiara Advani and Tabu in the lead. 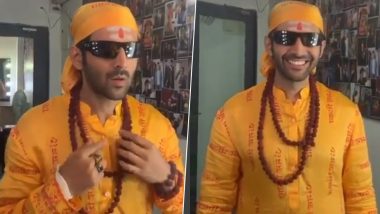 The upcoming horror comedy Bhool Bhulaiyaa 2 is the sequel to Priyadarshan’s 2007 released film Bhool Bhulaiyaa. This sequel, directed by Anees Bazmee, will feature Kartik Aaryan, Kiara Advani and Tabu in the lead. The makers had started the shooting of this much-awaited sequel in October last year. However, everything came to a standstill for the makers of Bhool Bhulaiyya 2 and many others (across industries) due to the coronavirus outbreak. Lockdown was imposed across the country due to which all the shooting had to be temporarily suspended. Kartik Aaryan Posts a Picture With Kiara Advani From the Sets of Bhool Bhulaiyaa 2 and the Caption Will Make You Laugh.

After months of lockdown, several parts of the country have received some relaxation and the unlock process is going on. The government of Maharashtra has also laid a detailed guideline that has to be followed when the makers resume films shootings. The guideline also includes that no intimate scene should be taking place and the entire cast and crew should be maintaining a safe distance. With the restrictions imposed in the filming process, it has become difficult for some of the makers to resume shooting of their films.

Regarding the shoot of Bhool Bhulaiyaa 2, producer Murad Khetani told Pinkvilla, “No, we have no plans of resuming shoot for Bhool Bhulaiyaa 2 right now. The entire team including our co-producer Bhushan Kumar, director Anees Bazmee, actors Tabu, Kartik Aaryan, Kiara Advani and others have been in regular touch and we have realised that the situation currently is extremely worrisome around us. It won’t be right or safe to shoot in such a situation. We will wait it out for some more time before we take a call on resuming shoot. The guidelines laid out also make it very inconvenient for everyone to shoot.” Bhool Bhulaiyaa 2: Anees Bazmee Says Audience Will Get to See Tabu in a Never Seen Before Avatar.

Bhool Bhulaiyaa 2 was scheduled to be released in October this year. But since the shooting of the film had to be put on hold and the delay that has happened due to it, the makers might have to reconsider about the film’s release.

(The above story first appeared on LatestLY on Jun 14, 2020 09:05 AM IST. For more news and updates on politics, world, sports, entertainment and lifestyle, log on to our website latestly.com).