Brahmastra: Amitabh Bachchan's Picture Collage Tells Us How Impressed He Is With Co-Star Ranbir Kapoor! 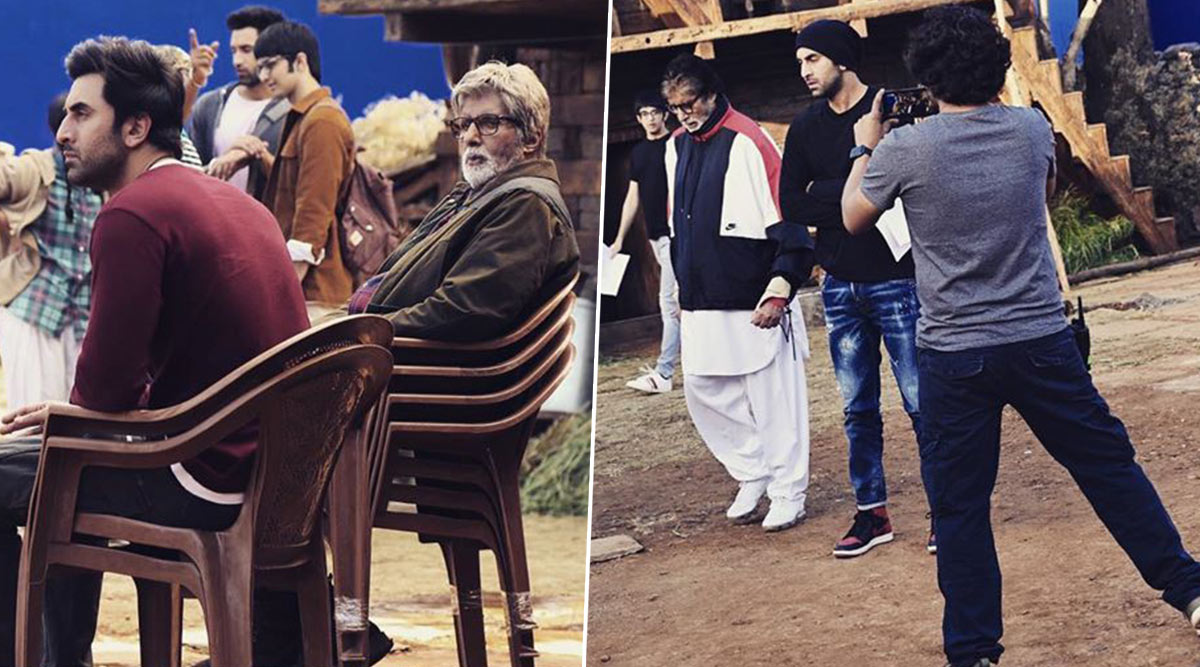 Amitabh Bachchan and Ranbir Kapoor on the Sets Of Brahmastra (Photo Credits: Instagram)

Ayan Mukerji directed Brahmastra is had finally got a final release date and it is 4 December 2020. Ranbir Kapoor-Alia Bhatt and Amitabh Bachchan are seen in the lead. The fantasy trilogy was getting delayed for the longest of time because of some of the technical reasons. However, recently, the makers finally revealed the release date and promised that it won't be delayed further. Recently, Sr Bachchan shared a few pictures with RK on the sets of Brahmastra. Gulabo Sitabo: Ayushmann Khurrana Calls Himself and Amitabh Bachchan the ‘Loggerheads’ of the Shoojit Sircar Film.

In the snaps, we see a collage of four pics, three of them being the same stills from the set. He is seen sitting on four chairs while Ranbir is sitting on two chairs. AB explains this in his caption saying, "... at work with one of my favourites, RANBIR ..... I need 4 'chairs' to keep up with his enormous talent."

The 77-yer-old megastar is seen in two looks, one is a modern stylish attire while the other is in simple kurta-salwar wear. On the other hand, Ranbir looks dapper as usual in maroon and black tees. Alia Bhatt was missing from the scene though! Check out the picture collage below.

Amitabh Bachchan and Ranbir Kapoor on the Sets Of Brahmastra

This is the first film from the already announced trilogy. The flick has an ensemble cast that also includes actors like Dimple Kapadia, Mouni Roy, Nagarjuna Akkineni, Prateik, Divyenndu amongst others. Also, Shah Rukh Khan's starry cameo is the highlight of the film as well. Now that the film is all set to hit the screens soon, expect more such snaps and snippets from the cast of the movie. Apart from this film, Big B will also be seen in Shooji Sircar's Gulabo Sitabo. He will work with Ayushmann Khurrana in this flick. The younger stars sure have a golden chance to learn from the 'Shehanshah' of acting!