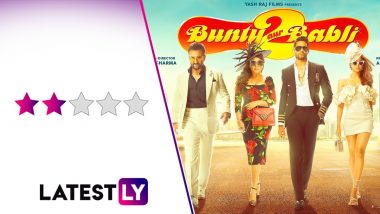 Bunty Aur Babli 2 Movie Review: Bollywood's fave con couple are back, and they are going through a midlife crisis. Contrary to how the 2005's Bunty Aur Babli ended, Rakesh and Vimmi have left their conning ways behind and have settled for domestic bliss in a town in UP. Rakesh, now a TTE and has a paunch, looks nothing like Abhishek Bachchan and is more like Saif Ai Khan. Don't feel bad for Junior B; as revenge, he has gone ahead and replaced Saswata Chatterjee in Kahaani spinoff, Bob Biswas. Sab Bollywood ki moh maaya. At least, we can take relief in the fact that for a change it is not the heroine who got replaced in the sequel. Bunty Aur Babli 2: Rani Mukerji In This BTS Video Says She Was Born to Play Babli!

Rani Mukerji continues to play Vimmi aka Babli, though her garrulous dressing style and accent have become more garish over the years. They have a horndog of a young son (I was a little queasy over the 'funny' scenes of him gallivanting over a younger girl), and are quite popular in their locality.

Trouble comes calling when they are apprehended by cops, led by Jatayu Singh (Pankaj Tripathi), once a deputy of OG BB's Dashrath Singh, now a senior officer himself. Someone please enlighten me if I had missed out on whether Bachchans had a fallout with YRF?

Anyway, Jatayu thinks the couple are back to their old ways, as rich and corrupt are getting conned and the BB calling card is left behind. Soon they realise that another younger couple - Kunal (Siddhant Chaturvedi) and Sonia (Sharvari Wagh) -  are behind the scams. The original Bunty and Babli are now reluctantly dragged  by Jatayu to catch the new Bunty and Babli, but have the years of inactivity put rust in the older couple's conning skills?

The first Bunty Aur Babli, directed by Shaad Ali, had a fun packaging and rambunctious score from Shankar-Ehsaan-Loy, with the incredible chemistry of Abhishek and Rani and Amitabh Bachchan's raucous presence embellishing what was a very average movie. Cut to the sequel, Bunty Aur Babli 2, directed by Varun V Sharma, might not have Abhishek, Amitabh or a very memorable soundtrack, but it has a very good set of actors trying their best to lift a screenplay that struggles with pacing and laughs.

Bunty Aur Babli 2 has its moments, the con scenes are amusing, but I believe it has more to do with the actors than with the material they had to present. Sidhant and Sharvari as the next-gen BB are very natural and share an easy chemistry, looking really good together. Their performances are also entertaining enough, and nowhere it feels like they are trying hard to overshadow their experienced co-stars. As for Saif-Rani, they are loud and OTT at times, but I don't mind them taking that route as it provides a very nice contrast, and also bring in some laughs. The only trouble is when the movie also goes as loud with them, and we had to sit through scenes that aren't half-amusing as they intend to be. Like a jealous Vimmi driving an ATV through the beach of Abu Dhabi because she sees her husband applying oil to a girl (which could have ruined their gameplan). Bunty Aur Babli 2 Title Song: The New Rendition of the Theme Track Will Make You Feel All Nostalgic.

The scenes depicting their mid-life crises don't have meat much, despite the potential. Like their introductory song sees Rakesh getting a spasm in his back when he starts performing, but that problem never returns when he does all kinds of jumps on the stage. Or how he suddenly loses his paunch for their plan to catch the young couple, despite Vimmi observing he can't lose years of fat within a day. Koi humein bhii yeh raaz bata do, kaise kiye?

Even the sequence when Vimmi doubts if Rakesh has lost interest in her feels forced in the narrative, rather than a natural play. Though we can't blame her for thinking so...

The sequel offers enough callbacks to the original, apart from the leads, some of which makes sense and some doesn't. In the latter category, I wonder when did Bunty Aur Babli theme song become a thing that Jayatu keeps humming that. Speaking of Jatayu, Pankaj Tripathi brings his characteristic humour into the role, and dominates in the first half. However, he doesn't get to do much in the second half. The finale has a couple of surprise twists, that you may end up liking if you don't think too much about how the movie is trying to con you into pulling off those twists. But then the biggest expose Bunty Aur Babli 2 does is in slyly poking holes into the real congame of how India is seeing achche din and vikas, and taking digs at some of the administrative ''changes' (In one scene, Jatayu says he is going back to Allahabad and then immediately rectifies it as Prayagraj). Bahut hard!

- The Actors Are Entertaining

- A Couple of Cons Are Amusing

- Screenplay Not Funny or Tight Enough

Bunty Aur Babli 2, like its predecessor, can be seen as a harmless entertainer, if you don't think too much of how it is conning your logic. The movie has released in theatres worldwide by YRF.

(The above story first appeared on LatestLY on Nov 19, 2021 02:34 PM IST. For more news and updates on politics, world, sports, entertainment and lifestyle, log on to our website latestly.com).