The film, while tagged as a fun family entertainer by Saif, has failed to make a mark with the audience as well as the critics. The film is said to make people miss the original film so much that they feel the Bunty Aur Babli 2 couldn't make a mark. 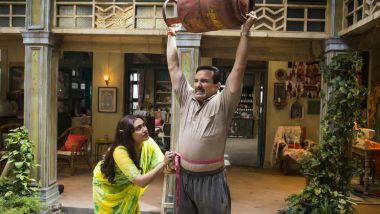 The film, while tagged as a fun family entertainer by Saif, has failed to make a mark with the audience as well as the critics. The film is said to make people miss the original film so much that they feel the Bunty Aur Babli 2 couldn't make a mark. While Rani and Saif are the saving grace in this film, the two actors are not a good reason enough to attract good reviews.

Hindustan Times: "After just 15 minutes into Bunty Aur Babli 2, one realises what a terribly written and poorly-executed film it is. The original, which most of us so thoroughly enjoyed when it first released 16 years ago, was best left untouched and director Varun V. Sharma should have just followed this rule. With Rani Mukherji reprising her character as Vimmi, this sequel is nothing like the first one. Not even remotely close. It's a snooze-fest that fails to engage or entertain. And sadly, doesn't have any punches to keep you from dozing off. Bunty Aur Babli 2 never gains momentum that you want to see in a comedy."

DNA India: "Directed by Varun V Sharma, 'Bunty Aur Babli 2' is a jazzed-up version of the 2005 film with a fresh appeal to the younger generation in the form of new faces, Siddhanth and Sharvari. Saif has replaced Abhishek in the film and Pankaj Tripathi, Amitabh Bachchan. While the plot of the 2021 film is on the same lines as the original film, some simple twists and powerful performances by the four lead stars and Pankaj, make it a decent watch."

Scroll.in: "Dressed in clothes that resemble the plumage of an exotic bird from the Amazon rainforest and furiously vamping it up, Mukerji is the most enthusiastic member of a reboot that struggles to justify its existence. Siddhant Chaturvedi and Sharvari are game for the latest game, but don’t have much to give beyond millennial cool. At least Sharvari makes a bigger impact than her co-star. Saif Ali Khan hams dutifully, Pankaj Tripathi is twinkly-eyed as always, and thus the 138-minute movie rolls on towards its inevitable next con: the franchise."

Firstpost: "Bunty Aur Babli 2 is sincere in its attempt to keep the brand alive and continue the narrative organically. But it chooses to ignore all the signs, all the red flags, and decides to cover them up under a flashy exterior. It touches upon the pros and cons of conning in the age of internet and social media, but only superficially. It also comments on the unsuccessful attempts at Ganga rejuvenation by the current government, but never takes a dive into it. It also shows how the two conning couples are different as one likes to clink whiskey glasses while the other prefers to down tequila shots. But it rarely goes beyond. And when it does, it doesn’t go too far. It’s a heist they can’t pull off."

Mint Lounge: "What’s depressing is the film’s reluctance to stay even a little ahead of the audience. There’s nothing egregiously wrong with Bunty Aur Babli 2—just a bunch of small disappointments adding up to an unsatisfying whole. By the end, Babli is speaking the language of studio franchises: licensing fee, copyright, brand. Perhaps this is the light in which the film should be viewed: an old property revived not because there was something new to say, but just because it was there."

India Today: "Bunty Aur Babli 2 is enjoyable when the camera is on Saif and Rani. There is a chase sequence between the original Bunty-Babli and the newbies, which is a major highlight and is well shot. Overall, the film is entertaining and worth a watch. Yes, you will miss Abhishek and Rani’s chemistry, but don't let that not be a reason for you to skip the film.

NDTV: "As Bunty Aur Babli 2 winds up, the senior duo moves into top gear and begins to teach the younger pair a thing or two about the art of conning people. But it is a case of too little too late. Given the note on which the film ends, another sequel seems very much on the cards. But if it's going to be a misfire of this magnitude, it might be better for Bunty and Babli to retreat right back into their shells. We will be more than happy to live with the memories of 2005." Bunty Aur Babli 2 Movie Review: Rani Mukerji, Saif Ali Khan, Siddhant Chaturvedi, Sharvari Wagh Add Infectious Charm to This Feeble Con-Game (LatestLY Exclusive).

Sreeju Sudhakaran from Team Latestly also watched the film and said, "Bunty Aur Babli 2, like its predecessor, can be seen as a harmless entertainer, if you don't think too much of how it is conning your logic. The movie has released in theatres worldwide by YRF."

(The above story first appeared on LatestLY on Nov 19, 2021 10:31 PM IST. For more news and updates on politics, world, sports, entertainment and lifestyle, log on to our website latestly.com).