Chaman Bahaar is a film directed by Apurva Dhar Badgaiyann. The movie stars Jitendra Kumar of Shubh Mangal Zyada Saavdhan in the lead, Chaman Bahaar is streaming on Netflix. 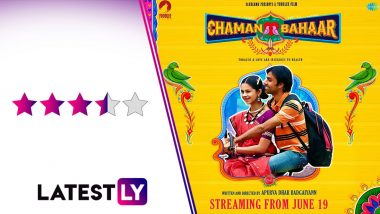 Chaman Bahaar Movie Review: As per Men's Health website, 'Peacocking' means 'something men do in order to highlight their strong points in order to stand out from their competition', which is done mostly to impress the females. Just like how the peacocks spread their tail-feathers and do a dance to impress the peahens. Chaman Bahaar, the indie film directed by Apurva Dhar Badgaiyann, is all about the peacocking trait that comes out in the high-on-hormones men when they learn a pretty girl is in the vicinity. Gajraj Rao, Jitendra Kumar Reunite to Tickle Our Funny Bone in TVF’s ‘Daddyji’s Gift’ (Watch Video).

Billu (Jitendra Kumar), a resident in a small town called Lormi, Chattisgarh, leaves his forest guard job (after getting scared by a bear) to start his own paan shop called 'Chaman Bahaar'. The business is extremely dull, since the restructuring of the district zones, meant pedestrians take a different route nowadays.

Here's when a new arrival of a family in the government quarters opposite Billu's shop raises excitement. The presence of a pretty teenage girl Rinku (Ritika Badiani) brings all the male teenagers and not-so teenagers to Billu's shop, increasing his business. While Billu is happy with that, he is also getting increasingly annoyed by the attention that Rinku is getting by the day, having gotten infatuated with her. Shrewdly, he tries to thin the herd but things doesn't go the way he plans.

Chaman Bahaar reminded me a lot of the Malayalam hit, Premam, well at least, the first segment of the latter You can draw a lot of parallels to how Billu and his customers try to draw Rinku's attention to that of George and his teenage ilk's attempts to win over Mary in Premam. Actually, the incidents shown in Chaman Bahaar is something you can relate to if you have grown up in small towns and village. The use of real-life locations add even more authenticity to the tale, and so does including yesteryear musical hits from Saudagar and Vishwatma.

The display of masochism leads to frequent stalking and glaring, and even internal competitions between the boys, especially a politician's son (Alam Khan) and the resident Casanova (Ashwani Kumar). There are also Chotu (Dhirendra Tiwari) and Somu (Bhuvan Arora), who seem to love revelling in the chaos. It is not even sure that these boys want to woo the girl, rather than happy besting each other in the competition of brawns.

Many of the scenes are funny, because Chaman Bahaar makes you laugh at these preening morons, rather than with them. My favourite scene is when the politician's son visits Rinku's class to show his clout, only to inadvertently expose the holes in the education system prevalent.

Since most of the movie is through Billu's POV, we take these displays of bravado as something amusing, not realising its repercussions till its late.

Billu, himself, is no averse to this preening contest, though instead of brawns, he uses his acumen to get rid of his competition. But as he does so, the meekness in him transforms into a dangerous recklessness that ultimately proves to be his undoing. He becomes the very same specimen he hates, in fact, his hurt ego turns him even more harmful, till he gets a rude awakening. I, though, wish there could have been exploration of Billu's relationship with his government employee father (Yogendra Tikku). Panchayat Review: Jitendra Kumar, Raghubir Yadav, Neena Gupta Spell Magic With Their Performances in the TVF Show With a Refreshing Take on Rural Life.

Like with Mary in Premam, Rinku is treated more of a fascinating painting. I don't think I have heard her utter a word even once in the film. Apurva, however, makes it clear that she doesn't like the attention she is getting. She may not say a word, but her facial emotions and the frequent slamming of her door has a lot to say. The fact that she is rendered voiceless is deliberate, as none of the men thought it is pertinent to know what she thinks. Even at her home, we realise that Rinku has to be behind the curtain when a stranger is in their living room, because that's the kind of world that we have created here.

Apurva plays with your expectations, when you form your own love story for the lead. Like a scene has Billu chasing Rinku's scooty on his cycle, which breaks down in the middle of the road. In a normal movie, you expect her to return and give him a lift or so. Here, it doesn't take that route.

Which is why, that unlike Premam, I am glad that the movie doesn't reward the boys' problematic behaviour. The second half, while a little stretched, shows how the boorishness the boys show affect the girl's family. Especially when the film tries to recreate the infamous 'Sonam Gupta Bewafa Hai' incident. The final scene between Billu and Rinku's family is touching.

All the actors, including the newcomers are really good, led by a very confident performance from the TVF fame Jitendra (Shubh Mangal Zyada Saavdhan). Playing a character as flawed as the customers he is serving, the actor is highly convincing in the role, considering a few weeks backs, we saw him as this city guy trapped in a village in Panchayat. Among the supporting cast, Dhirendra Tiwari, Bhuvan Arora and Alam Khan stand out.

Also, special love for the soundtrack of the film by Mangesh Dhakde and Anshuman Mukherjee. Especially the "Do Ka Chaar" track sung by Sonu Nigam.

- Doesn't Defend The Behaviour on Display

- Stretched in Second Half

Chaman Bahaar is a surprisingly delightful watch, equipped with a relevant message, especially if you are a fan of movies that explore the small-town stories in India. At least, it deserves to be applauded for its gumption to show that you can create an engrossing tale just around a matchbox shop on a dusty road. The movie is streaming on Netflix.

(The above story first appeared on LatestLY on Jun 19, 2020 05:54 PM IST. For more news and updates on politics, world, sports, entertainment and lifestyle, log on to our website latestly.com).