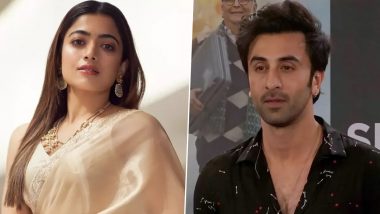 Mandanna, who works primarily in Kannada and Telugu films, is best known for her performances in movies such as Geetha Govindam, Devadas, Yajamana, and Dear Comrade. The actor, whose last release was Allu Arjun-led Pushpa, is set to make her Bollywood debut with spy thriller Mission Majnu, opposite Sidharth Malhotra. She will also be seen in another Hindi movie Goodbye alongside megastar Amitabh Bachchan.

On the auspicious occasion of Ugadi & Gudi Padwa, we welcome @iamRashmika to the team of #Animal!

Animal, which will start shooting this summer, also features actors Anil Kapoor and Bobbly Deol. The film is slated to release on August 11, 2023.

Animal is produced by Bhushan Kumar and Krishan Kumar's T-Series, Murad Khetani's Cine1 Studios and Pranay Reddy Vanga's Bhadrakali Pictures. Earlier, actor Parineeti Chopra was cast in the film, but according to media reports she had to opt out of Animal because of scheduling conflict.