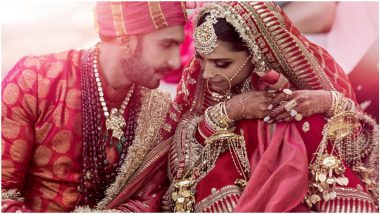 It almost, still, feels unreal that two of country's biggest superstars got married to each other. It seems like just yesterday when we were waiting for the wedding pictures of Deepika Padukone and Ranveer Singh. The couple is celebrating its second wedding anniversary today. They are the power couple of Bollywood, who likes to maintain privacy as much as they like to flaunt their life. For instance, they got married at Lake Como to stay away from the fanfare and the media glare but shared dreamy pictures of their multiple ceremonies. Deepika Padukone Enjoys an 'Extremely Competitive' Game Of Taboo With Ranveer Singh and Her In-Laws (View Post).

It is funny, how just a couple of months before their wedding, some were not even sure if they were legitimately dating each other. Deepika and Ranveer barely acknowledged their relationship in the media, despite many public outings together. Well, their hush-hush romance will surely make for a greater love story on screen some day in the future.

Well, till then, we have a brief history of this romance of epic proportions that is nothing less than a fairytale. Here's a timeline of DeepVeer's love life. Ranveer Singh’s Birthday: Deepika Padukone’s Wish for Her Hubby Is Filled With Love and Peace in Abundance (View Post).

There are a couple of stories about the time when Ranveer and Deepika met for the first time. One says that the couple first met in Macau, while attending an awards ceremony. Another says that Ranveer first spotted his future wife at a restaurant and was smitten by her in 2012.

Destiny played its part and the two were cast in Sanjay Leela Bhansali's Ram Leela in 2012. They did workshops together and were on sets the same year, where sparks flew. The film was shot until the first quarter of 2013 and released in November 2013. Voila, they were Bollywood's favourite on-screen couple. Murmurs about their real-life romance also began.

From 2013 to 2014, their romance got stronger. "I have felt like this in the past also, but it's a strong feeling this time. When you feel so strongly then you can say I guess I am in love. I don't know what is love, but what I am feeling is quite strong and cannot explain it. [I like] everything [about this girl]. Her kindness and her being genuine and caring," Ranveer said in an interview.

It was reported that they were visiting each other on the sets of their films. Deepika flew to the shooting of Dil Dhadakne Do. Ranveer came to meet her on the sets of Chennai Express. He even made a cameo appearance in her film Finding Fanny.

They teamed up for yet another Sanjay Leela Bhansali film, Bajirao Mastani in 2015. Their friends started teasing them about their romance openly. For instance, a lot of jokes were cracked at their expense at infamous AIB roast.

At a party hosted by Farah Khan, Deepika made an exit with Karan and Ranveer chased her with a rose. An elaborate joke that was captured by the paparazzi and loved by the fans. June 2015 saw another awards show the moment that added fuel to the fire. Ranveer got down on one knee and sang Ram Chahe Leela for her. They featured on Vogue India’s October 2015 issue.

In 2018, the couple began to shoot for yet another SLB film, Padmaavat.

Padmaavat saw a tumultuous route to release. Protests were held against the film across the country. Deepika received rape threats. But the couple got through it. Stronger.

Weeks before their wedding in November 2018, Deepika appeared on an episode of Koffee with Karan and acknowledged her affair. She said she's been dating Ranveer for six years now. Simultaneously, they also released statements on their social media pages announcing their wedding plans.

On the work front, Deepika and Ranveer are set to reunite again. In 83, Ranveer plays the role of former Indian skipper Kapil Dev and Deepika plays his wife, Romi Bhatia. The movie is also co-produced by the actress. It would have released in 2020, but the pandemic indefinitely delayed its release.

To be able to play a small part in a film that captures one of the most iconic moments in sporting history has been an absolute honour. Ive seen very closely the role a wife plays in the success of her husband’s professional and personal aspirations in my mother and 83 for me in many ways is an ode to every woman who puts her husband’s dream before her own...#thisis83 @kabirkhankk @ranveersingh @_kaproductions @reliance.entertainment @fuhsephantom @nadiadwalagrandson @vibrimedia @83thefilm

We are hopeful to see the movie in theatres in 2021. A very happy wedding anniversary to the couple.

(The above story first appeared on LatestLY on Nov 14, 2020 12:10 AM IST. For more news and updates on politics, world, sports, entertainment and lifestyle, log on to our website latestly.com).