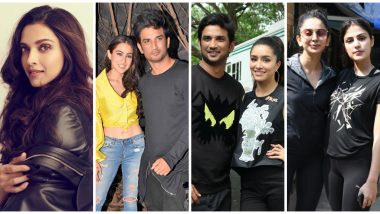 Putting an end to all speculations, Narcotics Control Bureau (NCB) has officially issued summons to Deepika Padukone, Sara Ali Khan, Shraddha Kapoor and Rakul Preet Singh, as per ANI. The A-lister actresses have been called to be questioned in a drug probe that was launched on the sidelines of the death investigation of Sushant Singh Rajput by CBI. Earlier, NCB had arrested Sushant's girlfriend, Rhea Chakraborty in the drug probe, who remains in judicial custody until October 6. Reports claimed that Rhea had listed about 15 people in the drug probe, four of which have now been confirmed. Sushant Singh Rajput Case: AIIMS Medical Board to Meet With CBI on September 22.

Deepika Padukone is currently in Goa, shooting for Shakun Batra's next film with Siddhant Chaturvedi and Ananya Panday. Reports suggest that she will be issuing a statement on the subject. Rakul's name had been on the news for the past two weeks and the actress had moved the court asking the media to show restraint while reporting. Sushant Singh Rajput's Viscera Not Preserved Properly by Mumbai Police?

Sushant was Sara Ali's first co-star when she made her debut with the film, Kedarnath. Rumours of an affair made headlines in 2018. Shraddha was one of Sushant's last co-star in the film, Chhichhore, which was a blockbuster hit.

Sushant died under mysterious circumstances on June 14. His father filed a FIR against Rhea Chakraborty alleging abetmemnt and money laundering. After a month-long investigation by the Mumbai Police, the case was handed over to the CBI. The financial angles were probed by the ED and the body unearthed chats about drug deals, alerting the NCB.

NCB has arrested about a dozen people so far, including Rhea and her brother Showik Chakraborty.

(The above story first appeared on LatestLY on Sep 23, 2020 05:47 PM IST. For more news and updates on politics, world, sports, entertainment and lifestyle, log on to our website latestly.com).