Actress Dia Mirza has spoken about Uttarakhand battling 40 active forest fires. The fires have already impacted forests across the Garhwal and Kumaon regions and is said to be the worst since 2016. 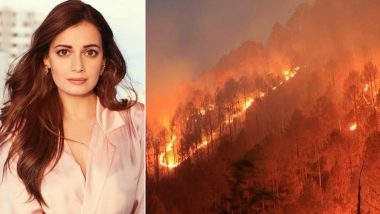 Actress Dia Mirza has spoken about Uttarakhand battling 40 active forest fires. The fires have already impacted forests across the Garhwal and Kumaon regions and is said to be the worst since 2016. "I once quoted Baba Dioum, a Senegalese forestry engineer in a blog, the gist of which was that in the end we will conserve only what we love. Do we love our forests enough to protect them is a question that niggles at me every time such devastation takes place in Uttarakhand. Uttarakhand is the birthplace of the Ganga and its forests feed many important river systems that are the life source of millions," said Dia. Dia Mirza Handles A Curious Fan Who Questioned Her About Her Early Pregnancy in the Most Boss Way Possible!

She adds: "This is a state with 71 per cent forest cover, over 743 bird species, 102 mammals, 72 species of reptiles and 439 species of butterflies. This is also home to an estimated 340 wild tigers in two nature parks -- Rajaji National Park and Corbett. So, this state literally cradles our future. To see it go up in flames like this repeatedly is very painful because I have been to these forests and have absorbed their serenity and majesty." The actress says that everyone needs to be aware of what this devastation can lead to. Dia Mirza Announces Pregnancy: Jacqueline Fernandez, Malaika Arora and Others Shower Love on the Actress!

"There is also neglect and a lack of awareness that precipitates the intensity of such a crisis. Our natural resource management needs to be better. As every person I spoke to in Uttarakhand once told me, we need to be more aware of the reasons that cause deforestation, pollution of the rivers, illegal mining and soil erosion. We have to understand how interdependent the human existence and mother nature are. Rivers will dry up if the forests that feed them are not protected. It will take the active participation of public and private partnership to secure our natural resources," she says. Meanwhile, the actress is producing a series of short films that will expand the significance of the 17 SDGs (Sustainable Development Goals).

(The above story first appeared on LatestLY on Apr 07, 2021 08:36 PM IST. For more news and updates on politics, world, sports, entertainment and lifestyle, log on to our website latestly.com).