Dia Mirza Handles A Curious Fan Who Questioned Her About Her Early Pregnancy in the Most Boss Way Possible!

Dia Mirza announced recently that she is pregnant with her first baby with Vaibhav Rekhi whom she married in February this year. Since then people have been making means comments about her getting pregnant before marriage. Finally, the actress explained what actually happened. 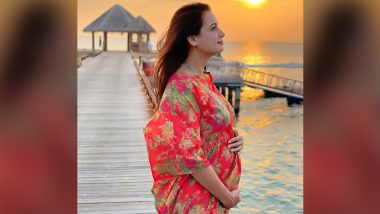 Dia Mirza's pregnancy announcement brought in a lot of calmness in these troubled times. It's one of the good pieces of news that had become so rare, all thanks to a pandemic-led existence. But some had issues with that too. Dia's announcement came only a few months after her wedding to Vaibhav Rekhi. This was enough to spark a troll fest on social media sites. Many mocked her for marrying Rekhi because she got pregnant. Although the actress doesn't owe anyone an explanation for her choices, she still obliged a fan who congratulated her but also inquired why she didn't announce the pregnancy before marriage. Dia Mirza Announces Pregnancy With A Baby Bump Picture and a Heartwarming Note About Embracing Mother Earth

In perhaps one of the most refreshing incidents of a fan actually asking sensible questions to celebs, the Instagram user praised Dia for having a women priest at her wedding ceremony. But she found it strange that the actress decided to adhere to the stereotype of getting pregnant post marriage. Dia sweetly explains in detail why she did what she did. 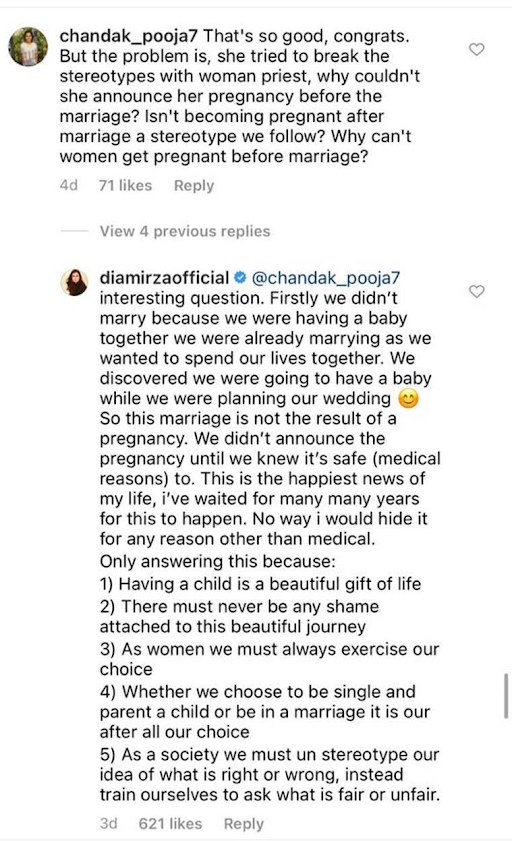 Dia got married to Vaibhav Rekhi on February 16 this year. It was a small ceremony with only friends and family in attendance. Dia looked absolutely amazing in the red saree. In April this year, Dia announced her pregnancy with a picture flaunting her baby bump.

(The above story first appeared on LatestLY on Apr 05, 2021 09:07 PM IST. For more news and updates on politics, world, sports, entertainment and lifestyle, log on to our website latestly.com).