Did You Know Jacqueline Fernandez Once Wanted to Become a Nun?

Jacqueline Fernandez, the Sri Lankan beauty, made her Bollywood debut with the film Aladin. On Neha Dhupia's podcast No Filter Neha, the gorgeous Jacqueline stated that she wanted to become a nun before she discovered boys. 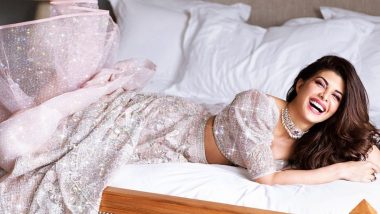 Jacqueline Fernandez, the Sri Lankan beauty, made her Bollywood debut with the film Aladin. Also known as the Jacq of hearts in the country, she has had hits and flops in her acting career. It was the psychological thriller Murder 2 that shot Jacqueline to fame. Be it action, comedy or thriller, Jacqueline has experimented in every genre. Be it acting or dancing, she has caught everyone’s attention with her impeccable skills. But you’d be surprised to know that Jacqueline did a thought of becoming a nun. Jacqueline Fernandez Has the Cutest Fan Girl Moment as She Clicks a Selfie With Katy Perry Ahead of the One Plus Music Festival (View Picture).

On Neha Dhupia's podcast No Filter Neha, the gorgeous Jacqueline Fernandez stated that she wanted to become a nun before she discovered boys, reports Mid-Day. She was quoted as saying, “I went to a convent school that was run by nuns. As a kid, you follow an example and get influenced. I was influenced by them. We were in school, and in church every day. I was in the choir too. There was a lot of gospel stuff (that we sang). It seemed like (I had no) other way to go.” She also mentioned, “I started discovering boys. I started having crushes, and eventually knew that the nun thing would not work out.” Attack! After Dishoom, John Abraham and Jacqueline Fernandez Reunite Once Again for This Action Film.

The episode of Neha Dhupia’s podcast featuring Jacqueline Fernandez would be aired today. She has revealed about her journey in Bollywood and how she managed to get projects in the initial phase of her acting career. On the work front, Jacqueline Fernandez would be seen in John Abraham starrer Attack. She is also set to be featured in a special number in Salman Khan’s Radhe. She would also be seen in the Netflix film, Drive, which also stars Sushant Singh Rajput. Stay tuned for further details from the world of entertainment.

(The above story first appeared on LatestLY on Dec 03, 2019 09:14 AM IST. For more news and updates on politics, world, sports, entertainment and lifestyle, log on to our website latestly.com).