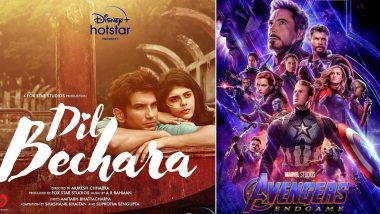 Sushant Singh Rajput's fans will ensure that his last release, Dil Bechara, creates its own new records. After revealing their determination to make it the world's most-watched trailer online, the trailer has already started registering new records, one at a time. The trailer of Sushan and Sanjana Sanghi's upcoming release was released on July 6 at 4:00 pm and within hours of its release, it has managed to surpass 3 million likes on YouTube. This is a rare feat and a big achievement for the film's entire team. Dil Bechara Trailer: 6 Moments From Sushant Singh Rajput and Sanjana Sanghi's Love Story That Deserve Special Love.

However, hitting the desired numbers is not the only achievement here. Dil Bechara's trailer has also managed to beat Avengers: Infinity War and Avengers: Endgame when it comes to clocking the desired number of views in less number of hours. While it took close to 24 hours for Endgame to hit 2 million 'likes' on YouTube, Dil Bechara was able to move beyond it with close to 4 Million Likes in less than eight hours.

Please note, we are talking about the likes and not views in here for Marvel's much-awaited project (Endgame) enjoys a record number of 135 Million views to date. Whereas Dil Bechara is currently relishing its record run with over 13 Million views. Another thing to note here is that the situation is win-win for Disney. The studio that produces Marvel movies has also acquired Fox Studios, the producers of SSR's Dil Bechara. So technically, Disney's now associated with all three projects discussed in this article. Dil Bechara Trailer: 'Ye Kahaani Adhoori Hai' Say Netizens as They Miss and Fondly Remember Sushant Singh Rajput (View Tweets).

The trailer of Sushant's last release received an overwhelming response from his fans and admirers. The movie is slated to release on Disney+ Hotstar on July 24 and it will be available for their subscribers and non-subscribers.

(The above story first appeared on LatestLY on Jul 07, 2020 12:24 AM IST. For more news and updates on politics, world, sports, entertainment and lifestyle, log on to our website latestly.com).