These are some of the moments from Dil Bechara trailer that will definitely melt every die hard romantic person's heart. 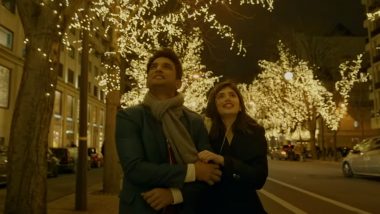 Sushant Singh Rajput and Sanjana Sanghi's Dil Bechara trailer released on July 6, 2020. The film directed by Mukesh Chhabra is much awaited by late star Sushant's fans. After Sushant's tragic demise by suicide, the fans have been wanting to watch his movie on the big screen. However, due to the pandemic and lockdown that followed, the movie is now releasing on Disney+ Hotstar. The trailer is here and it is simply bound to make every fan emotional. Sushant plays 'Manny' while Sanjana is seen as 'Kizzie Basu.' Now, take a look. Dil Bechara Trailer: 'Ye Kahaani Adhoori Hai' Say Netizens as They Miss and Fondly Remember Sushant Singh Rajput (View Tweets).

Sushant's 'Manny' has a fun and enthusiastic entry. He adds a rush of energy with his presence, making us long to see more of him already.

While introducing himself, Manny also reveals that he suffered from osteosarcoma a few years ago but he battled it. He futher adds, "But I'm a fighter."

In one of the scenes we see him recreating the iconic 'Raj and Simran' moment while lending his hand to Kizzie. This scene must have been super special to him as Sushant was a huge Shah Rukh Khan fan in real life.

In one scene, Manny teaches Kizzie a word called 'Seri' which means 'Okay' in Tamil. They declare it as 'their word.' Cute!

Kizzie and Manny take their lovestory to the city of love. The twinkling Eiffel tower and their romance on the French streets seem to be the highlight on the movie.

The life lesson by Manny

These were some of the moments that will definitely melt every die hard romantic person's heart. We hope that Sushant and Sanjana's movie receives heaps of love, irrespective of the medium. The film is releasing on 24 July, 2020.

(The above story first appeared on LatestLY on Jul 06, 2020 05:06 PM IST. For more news and updates on politics, world, sports, entertainment and lifestyle, log on to our website latestly.com).