Divya Khosla Kumar Lashes Out At Sonu Nigam For Making False Allegations Against Her Husband, Bhushan Kumar; Questions His Own Marriage and Fidelity (Watch Video) 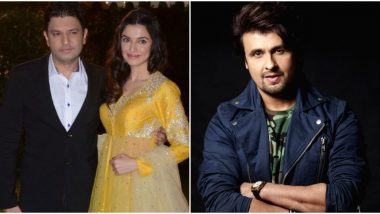 Playback singer Sonu Nigam had recently shared a video in which he mentioned about how some music labels try to oppress new talents and labelled the music industry as bigger mafias. Without taking any names he had also stated that the music industry is controlled by two popular companies. The singer then shared another video in which he alleged that T-Series’ head Bhushan Kumar begged him to do the Deewana album and also claimed that Bhushand requested Sonu to help him introduce to Smita Thackeray, Bal Thackeray, and so on. He also revealed in the video how Bhushand asked the singer to save him from Abu Salem. Divya Khosla Kumar Calls Sonu Nigam 'Thankless' As She Responds to His Accusations Against Husband Bhushan Kumar and T-Series.

Bhushan Kumar’s wife Divya Khosla Kumar has shared a video in which she has slammed Sonu Nigam for making false allegations against her husband. In the video, she has questioned the playback singer if he has ever given break to any new talent instead of blaming T-Series that has always welcomed outsiders and given them a major breakthrough. Divya has also mentioned that ever since Sonu released his video on social media, she and her family have been receiving threats. Divya said that Bhushan Kumar has been receiving ‘death threats’, she has been receiving ‘rape threats’ and also her child is being ‘threatened’ across social media platforms. Sonu Nigam Threatens Bhushan Kumar That He'll Expose Marina Kuwar Video, Netizens React!

In the video that Sonu Nigam had shared, the singer had also threatened Bhushan Kumar that he will expose him and his controversy over Marina Kuwar sexual assault accusation if he does not stop exploiting him. Divya Khosla Kumar questioned Sonu Nigam about his own marriage and fidelity, how his wife had blamed him publically. She tells him before accusing someone else, he should look into his past.

(The above story first appeared on LatestLY on Jun 25, 2020 10:53 AM IST. For more news and updates on politics, world, sports, entertainment and lifestyle, log on to our website latestly.com).