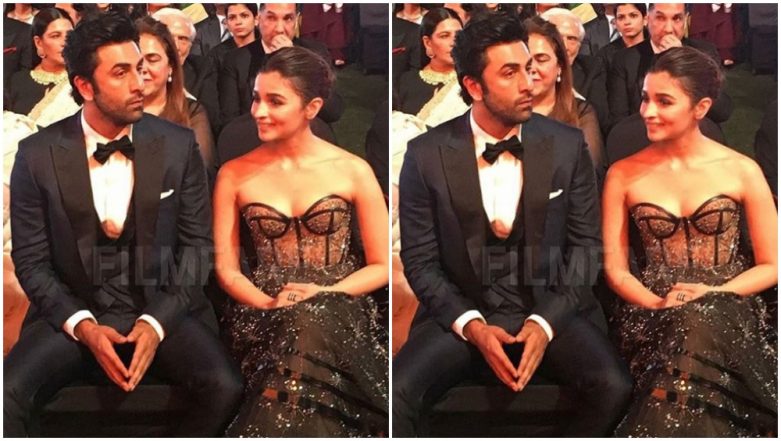 Ranbir Kapoor and Alia Bhatt are the not-so-new but definitely the most loved couple of Bollywood. The couple has never shied away from flaunting about their relationship. And once again we get to see the duo in their stylish avatars at the 64th Vimal Filmfare Awards. Yes, the couple has graced the event, donning the best outfit and yea, they look stunning together. Filmfare Awards 2019 : Ranveer Singh Goes down on One Knee to Accept the Award from Wife Deepika Padukone, Watch Video.

Ranbir Kapoor and Alia Bhatt met on the sets of Brahmastra. They've been dating since then and have been quite open about their relationship. Though Ranbir and Alia have never really announced about their marriage, the buzz is, parents of the duo want them to get settled at the earliest. There were reports stating that as soon as Rishi Kapoor returns to India, family members of the couple would meet a panditji and finalise the wedding date. However, there has been no official announcement about their wedding date yet. Alia Bhatt, Katrina Kaif, Sonam Kapoor, Ranveer Singh - Here Are All The Biggest Disappointing Fashion Stunts At The Filmfare 2019 Red Carpet!

Ranbir Kapoor and Alia Bhatt's film Brahmastra is a trilogy, directed by Ayan Mukerji. The film also stars Amitabh Bachchan in a pivotal role. Part one of the film is scheduled to release during the time of Christmas this year. For further updates, keep watching this space.